What to do if no tag matches main content of question?

Question in question (now deleted): Creating an announcement bar that can be updated-live 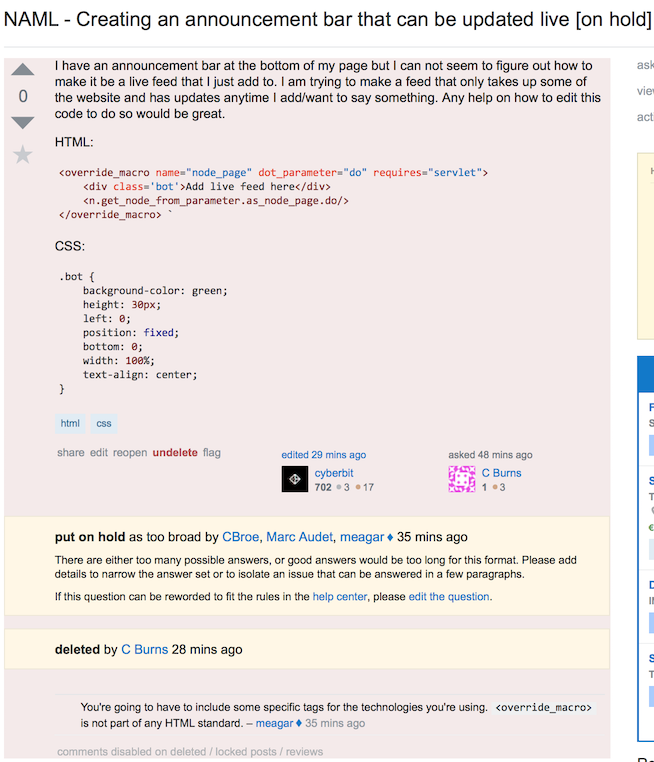 The OP tagged this question with html and css, which made sense at first based on the code posted. After some research, I determined that the actual language being asked about is NAML, for which there is no tag.

How should something like this be handled? Since there was no tag, I edited the title with a prefix ("NAML - foo bar"). Is this appropriate? I also notice that as I write this, the question was put on hold as "too broad" (and then deleted shortly after). Is that another course of action unless the OP clarifies? How important is taxonomy?

Using the right tags makes it easier for others to find and answer your question.

However, neither you nor the OP has the privilege to create tags. What you could have done in this case, is suggest an edit, and in the edit summary ask the reviewers to create the tag. (Reviewing edits requires 2k reputation, so they would be able to do that.) That wouldn't help if the OP approves the edit, or you encounter a couple of robo-reviewers who just blindly click 'Approve' for each suggested edit, but at least you tried.

Looking at the screenshot (thank you!), the main problem here is that the author failed to mention that they were using NAML. You should have edited the question more to specify this fact; the title wasn't enough.

In particular, the bast thing would have been to change the HTML: to NAML:, and also link it to the NAML webpage.

(I think it was OK to include the HTML tag, if only to have syntax highlighting.)

I think that the main reason why the mod acted like they did was because it was unclear what the OP was asking (it's not too broad once you know it's about NAML). I think that if you would have @pinged them and explained the situation, they would have helped to sort the situation out.

4
Unable to add the SCSS tag to a question
102
A moderator deleted someone's good post and it's my fault
27
Should the first tag be removed from the HTML title?
34
Warnings when using certain tag combinations
6
Generic tag used while framework has been used?