The console output is now by default visible in the snippet, which is especially blocking in the inline view of the snippet. Six lines of output, and nearly all of my snippet is gone.

It looks like you attempted a very, very elaborate workaround for the issue of the poorly resizing snippet window, which is still not fixed. With a two line fix of CSS, almost every developer could just use the 'normal' console window if desired.

Having an extra console output could be a nice option, but mostly not necessary, and I think it shouldn't be on by default (and at least it shouldn't be blocking like this).

Btw, if your screen is only a bit smaller, stuff starts flowing all over each other. Use console label is not tied to the checkbox, close button moves down, and the code is on top of the buttons. No big problems, since usually a screen won't be that small, but again something that should be quite easy to fix: 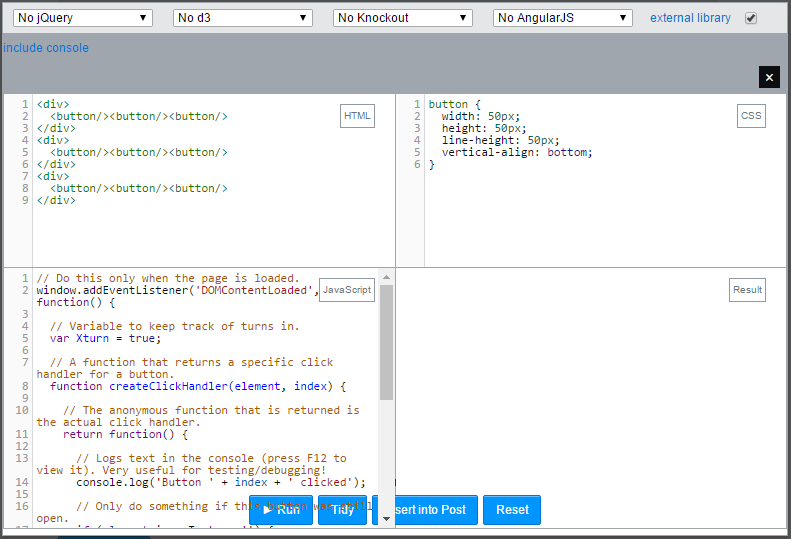 The community has been looking for a standard, acceptable means of demo'ing javascript output... and while we should be using console.log() and associated methods, people have fallen to using alert(), document.write(), etc... because they manage to provide immediate output to the reader by taking advantage of the snippet results window.

So, the team (thankfully) implemented a virtual console.

Keep in mind that you can very easily disable the virtual console for your particular snippet if it's interfering with your UI. I understand that you disagree with having to, so let's consider our options...

Not the answer you're looking for? Browse other questions tagged bug design stack-snippets .