Don't ban users who are improving

I am proposing that the SO question ban algorithm lets users who are improving their question score ask one more question.

I was banned from Stack Overflow for asking bad questions. I began to improve (slowly). I was still banned even when I was improving. I am unbanned now. I got to ask that one more question, because I was serially upvoted. The serial upvotes where reversed and my new question was upvoted. Yes, I know I was stupid before and should have read more help documents and... 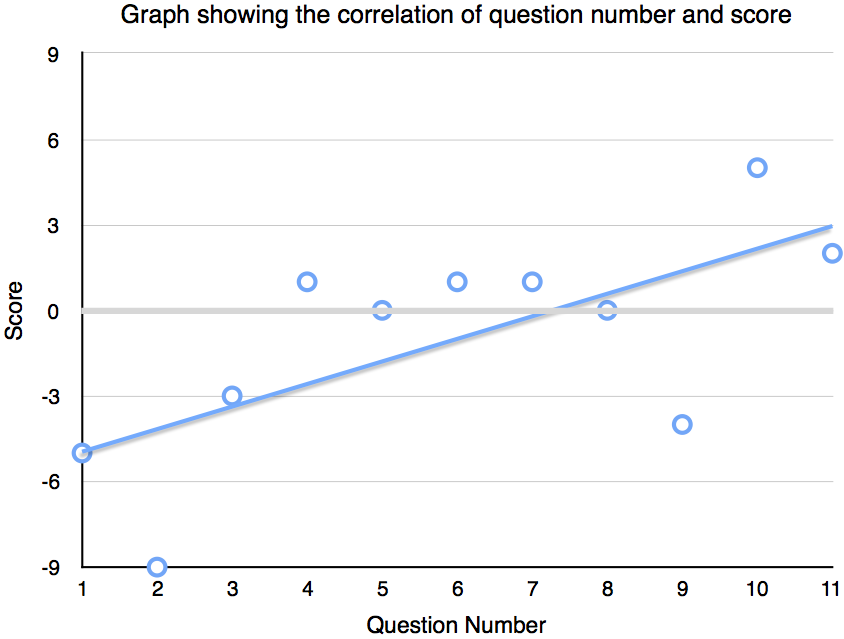 The line of best fit clearly shows that I was getting better at asking questions over time, yet I was still banned. I received an upvote which unbanned me.

I believe that the question banning algorithm should take into account if a user is improving over time. Users that are improving are likely to continue to improve. Users who do not show signs of improvement should still be banned. This should only unban a user if they are on the edge. Users who improve from -20 to -10 should not be unbanned just because they improved. Users who are improving in a near of the ban threshold should be allowed to ask one more question.

I'm not suggesting that the question ban algorithm should be completely redone, but tweak slightly.

I am not banned.

I don't think this is a good idea.

"improvement" is inherently subjective. Going from "very very bad" to "very bad" is an improvement, but I still wouldn't want that user to continue "contributing" to the site.

It's been a while since I was a new user, and I can say that I've seen a lot of new resources geared toward onboarding new users that didn't exist when I started. I have a hard time excusing such behavior when we now have an extensive FAQ and help pages.

The fact of the matter is you were question banned because you were asking poor quality questions. There are a number of signals that you should have noticed before ever getting close to a question ban.

The first of which would be downvotes. If you're receiving a lot of downvotes, it's your job to figure out why, and to correct your post.

The second would be close votes. If a question you've asked gets put on hold, it's your job to figure out why and to be sure you don't make that mistake again.

Question banning only happens when a user shows that they're consistently unable to follow Stack Overflow's guidelines.

Instead of attempting to make excuses for why you were banned and should not have been, consider spending some time away from Stack Overflow reflecting on the actions you took to put yourself in this position.

It's rough. No one likes being sidelined, but sometimes it's necessary.

"Improving" is the operative word. In my mind, you should keep improving until your questions have a net positive score.

To that point, I feel like the question ban is acceptable; you need to work on the questions which weren't well received until they can are received better.

The best thing you can do in all realism is to go back and improve your existing questions as best as you can, where you can. The questions scored -9 and -5 are especially detrimental to you so I would put more energy into those.

10
Do mods know the question banning algorithm?
4
Does deletion of questions by community make a question ban "unsolvable" for a user?
2
Should we ban the author if there's spam/rude flags on his posts?
114
Does banning relatively new users encourage alternative accounts?
519
Triage needs to be fixed urgently, and users need to be notified upon receiving a review ban!