A user is currently suggesting edits to remove the setstyle tag from different questions.

How should I handle this? I thought that burnination should always be performed after discussing it on meta and then users with 2k+ reputation editing the questions (and not by somebody under 2k).

This is what their latest revision history looks like: (and it does not list all of the revisions that got rejected as well) 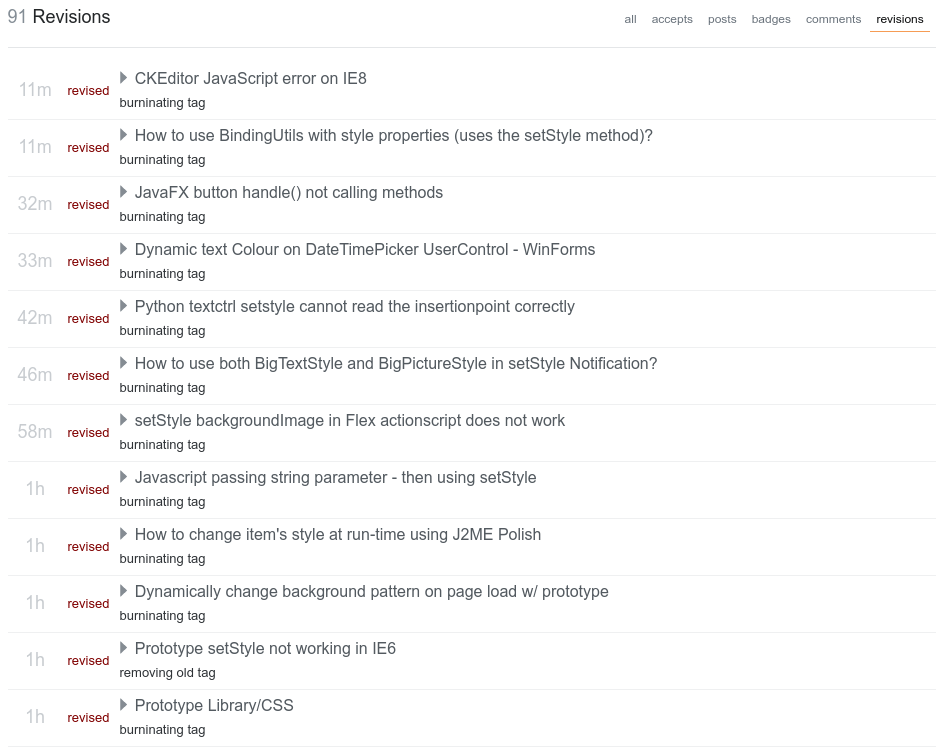 And here is a review I did of this user.

Burnination is not just about removing a tag, otherwise we would have made a bot to do it. Most of the time, the post has other problems. The fire of burnination is not always destructive; it consumes posts that are not worthy, but otherwise it serves as a beacon to guide us to posts that really need to be improved.

This user doesn't seem to understand that. Looking at the post you linked, I can see a number of issues. Let me point them out:

Trigger update of a tableview cellvalue without changiing the value

That first part is a fount of wandering errors. There is some code (which appears to be good enough), and then it ends with this nut:

The solution is to @ping the author and to tell them that they are doing this ugly not fixing the rest of the post and that they need to do so. That way, they have an opportunity to change their behavior before they waste the time of more reviewers, and the ban that might result from it.

You might think that I am overly forgiving, but I think that there's a possibility that this user may just want to help, but doesn't know the rules. I think that they could become a valued editor if they are given direction.

If they take their time and fix the rest of the post, then they will not be flooding the queue to the extent that they are now. Flooding the queue is only a problem when reviewers would need to put more work into fixing the post than the original suggestion did.

It seems that I was right. The user in question, MKII, has apologized for all this trouble. From the comments:

Sorry, I didn't realize that was wrong to do. I just thought to do it since there were only ~20 questions tagged. Guess I should've looked for rules before doing it. I won't do it again.

Re-edited the question properly this time. I will keep in mind the guidelines for the next time.

I don't think we need to worry about their edits any more.

Of course, I think that we still need to improve the system. It would be really nice if "reject and edit" could be used to teach new editors about editing (with a checkbox or something). A banner could be shown to the user the next time that they went to edit, so it wouldn't be hidden away deep within their profile.

Not the answer you're looking for? Browse other questions tagged discussion suggested-edits burninate-system .

35
How to deal with serial tag-only edits from Sub 2k users?
3
What is the correct procedure for a user who edits only the tag?
54
The [setstyle] tag should go out of style
16
Automatically append guidance to questions tagged [burninate-request]
-11
Moderator overriding a user's approved tag-only edits

13
User attempting to burninate tag without Meta discussion
6
Reviewing Reviews: they aren't displaying the content as it existed at the time of the review
8
Editing Ban, But Few Rejected Edits?
3
How is the order of suggested edits in the review queue handled?
23
Markdown and rendered changes are very different in edit review queue
3
Why is there no tag review queue?
2
When can meta tag wiki be updated, how often, why should changes be reverted?