To clarify about a dupe: Upvotes and flags on locked post comments

It isn't a dupe. That question is mainly focusing on the part of removing the button, or warning. It's tagged as bug, but isn't actually speaking about the bug that you can flag it. It's speaking of the bug that the warning is appearing, and the buttons should be removed. I don't think this is a dupe of it.

I came across this locked post: Hidden Features of C++?

I was reading through the comments, when I by mistakenly clicked the flag icon. To my surprise, the flag dialog box appeared. I just randomly flagged the comment as "not constructive", to see if it will accept my flag. And yes, it did!

The flag was on the first comment of the question: 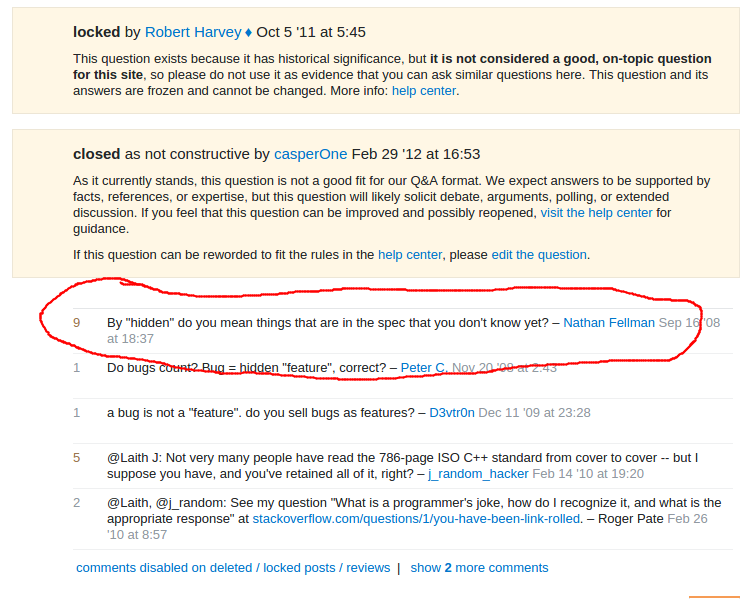 To cross check, I checked my flag history, and saw a pending flag on the comment:

I thought that flagging on locked posts wasn't allowed, as whenever I try to upvote a comment on a locked post, I receive a message dialog, which holds some text:

The comment is not eligible for voting or flagging

Choose a locked post. For example, the one I chose. Then:

CAUTION: Mostly your flag is gonna be declined, unless it really should be deleted. If you're on the verge of a flag ban, do not try this.

What? My flag got accepted! How could this happen? I don't think the comment was not constructive. Can a mod undelete the comment?

I just randomly flagged the comment as "not constructive", to see if it will accept my flag. And yes, it did!

I thought that flagging on locked posts wasn't allowed,

A question or answer which is locked can no longer accept:

It looks like locking a question doesn't imply that all the comments were checked. So it's totally possible that a post is locked while some bad comments are still present.

So I think it's not a bug but a feature that you can still flag comments attached to a locked question.

But there is a contradiction between the error message The comment is not eligible for voting or flagging and the answer on Meta.

The warning should be corrected or the ability to flag should be removed in this specific case.

Not the answer you're looking for? Browse other questions tagged discussion bug comment-flags locked-posts historical-lock .

17
Comment flag window for transparent answer hidden behind new answer box
25
Can mods also see the answers while they're reviewing comment flags on a question?
21
Comment flagging dialog can't be re-opened after flagging
51
Flag changed to "harassment, bigotry, or abuse", causing it to be declined, when I didn't flag it as such