How is this question not spam?

The flag was declined because the moderator "found no evidence to support it".

What would have been the proper cause of action / the right flag?

Since the question is on hold now I can't see what happened to the question, it would've been education though. 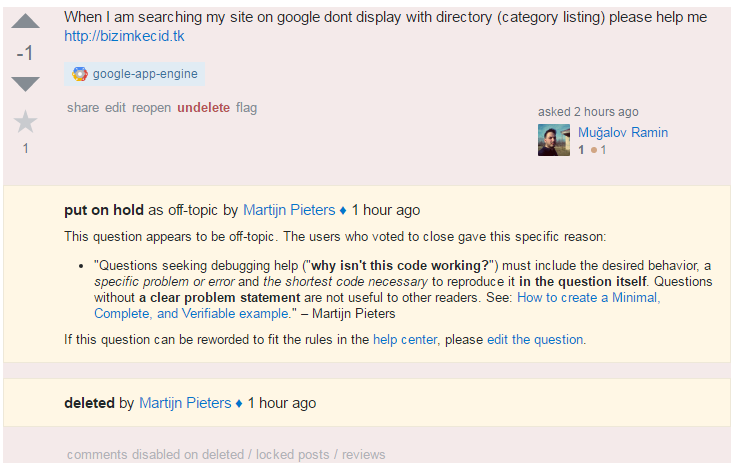 I don't think that the post was an attempt at spam. It seemed to me like a confused new user just wanted help with their website. Like an unfortunate percentage of the users that come to SO, they haven't read the help center/tour (and they probably don't know enough English to understand it if they did).

Let me address the points you have made:

I wouldn't call it "aggressively promoting". They only mentioned it twice, and they likely don't have any other posts.

It's not unheard of for people in their question to link to their website that they need help with (but it's not encouraged, due to concerns about security and link rot).

And I think that they included the domain in the title in a way that's similar to how other users include the name of their project in the title.

"exists only to promote a product or service"

Spam takes many forms, so it's possible that it could have taken this form. But I think it's far more likely that it's actually a person struggling with making a website, not a spammer masquerading as one.

it did not properly "disclose the author's affiliation."

Actually, after you piece together the sentence, it's clear that they said that they needed help with their website. The logical thing to conclude would be that the link lead there.

Without reading the wiki, one might naïvely conclude that "google-app-engine" refers to the engine behind Google searches. If you look at the question, it's clear that it involves Google somehow.

Also it did not give any kind of context, so there is no way we could've been able to answer the question without tons of comments, which would've been off-topic on Stack Overflow anyway.

Well, obviously. The first thing that you mentioned was that "it asks an off-topic question". The close reason agrees.

I did not want to flag the question as off-topic since moving it to any other Stack Exchange site would've been pointless.

Yes, I understand your confusion (but that's a meta post I don't want to bring attention to). The options directly on the off topic menu are not for migration (migration is under "this belongs on another post in the SE network"). I HATE the design, and I think that saying "you could get help on SU/SF" just causes the same crap to be posted over there. But that's an entirely different issue.

It's not spam, just a confused noob.

24
Are the answers on this question worthy of a spam-flag?
20
Why was my spam flag declined for this answer?
3
What was the proper way to flag this answer?
18
How to distinguish between spam and non-spam answer, and how to bring it into moderator's attention
3
Flag declined; moderator needed more context?
78
Spam flag declined on link from Founder & CTO, dozens of similar posts
13
How to handle the [image-charts] tag?
8
Why wasn't this post "spam"?
12
Should I use a custom flag instead of a spam flag for not obvious spam?