Why was this question about curly brackets (Python) deleted?

This question was deleted.

OK, it wasn't clearly formulated and only in the comments we found out what he was really looking for.

But it's about curly brackets and Python, and Python is a bit ambiguous with curly brackets: They aren't used for marking the start/end of functions/if/for/... but most commonly used as dict/set literals. But in strings they have another meaning. And I remember I was in the same situation as the OP: I just didn't know what is meant and googling "curly brackets python" wasn't very helpful.

I'm not complaining that I've lost reputation when the question was deleted; it's just I put some effort in answering the question because I was in the same situation once.

TLDR: Why was the question deleted rather than marked as duplicate?

While it was unclear what the author was looking for, I think the question was worth asking because of the different meanings of curly brackets in Python. And I couldn't find a question like it.

For lower reps here's a snip 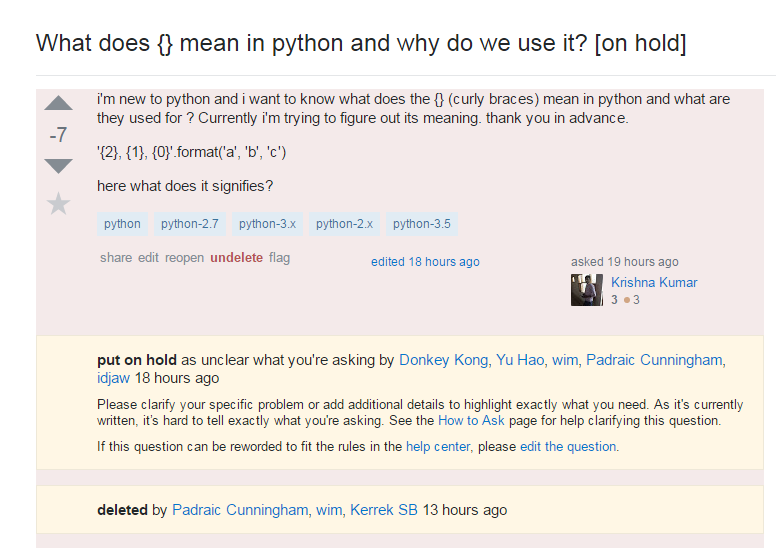 Why was the question deleted rather than marked as duplicate?

More people thought that it was "unclear" rather than a duplicate, and then two of the people that cast a close vote decided to also cast a deletion vote.

I think the frustration being demonstrated with this question was that it seems relatively basic; it's one which anyone would stumble upon the answer given a few minutes of reading on the .format method for strings in Python. It probably didn't need to be deleted immediately since there's nothing actively harmful about a question which wouldn't have made its way to the front page.

What would have been even better would have been to edit the question to clarify that the OP meant curly braces in the context of formatting strings, and ward off the additional wave of down and close voters. If it truly was a dupe, then it could be reasonably be closed as one.