There is something new on SO today that is triggering noscript warnings. This started this morning if I recall correctly. I been on SO for well over a year and have had my browser (FF 38.8.0 ESR) tweaked to work with SO allowing all but the:

*.gstatic.com and apis.google.com for viewing the Not a Robot test

When that occurs, I simply temporarily allow the entire page, pick the pizza or pie pictures and go on my way.

I have read Which browsers are officially supported, and what else do I need? and NoScript blocking certain links on Stack Overflow and neither explain why I get new warnings today. (although I noticed no change on April 16 from a javascript standpoint) The warnings now appear across the top of the browser window as: 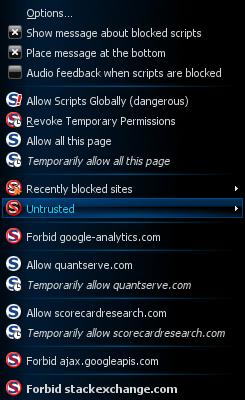 The blocked scripts list has not changed in ages, so why are warnings now being triggered that were not triggered before? I set a timeout of 4 seconds to have the notification close automatically, but that doesn't explain why it is now triggered to begin with.

The same blocked sites quantserve.com and scorecardreasearch.com have been blocked since I joined SO and they have never triggered warning with each page load before.

Has something changed on SO that would explain the new noscript warnings today? (there have been no browser updates to explain the change on my end) Or, is this a new present from one of the allowed scripts google-analytics.com, ajax.googleapsis.com, or stackexchange.com? Any insight would be appreciated.

After poking around a bit more, it looks like adzerk.net is the cause. I find it here:

I know I haven't seen an adzerk.net script from SO before today. (I could also be going senile...). Is that new? It appeared in the noscript list not too long after the original post. e.g. 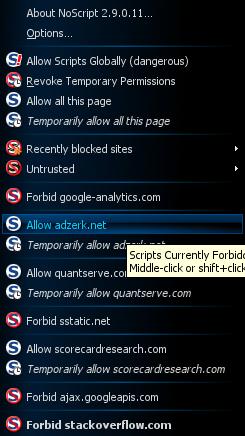