Something that I have been noticing lately is that the shade in which Questions asked in my favorite tags are highlighted has been lightened a bit. For example, this screenshot: 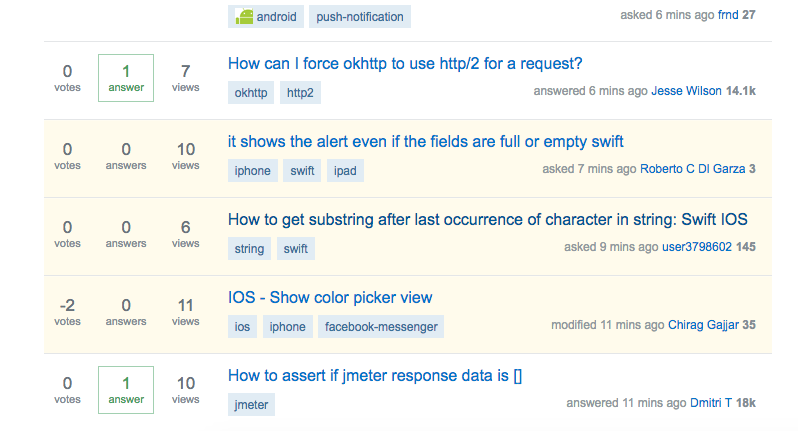 Now, iPhone, swift, ipad, ios are in my favorite tags but jmeter and okhttp, http2 are not. I can notice slight highlight on ios related questions but it is somehow less visible than previously (I actually had to use Digital color meter app to distinguish between the two).

I don't know if it is relevant or even has an impact on the design visibility but I am color blind as well so it might be that it looks fine to most of the community members but it doesn't to me at least.

I believe previously the favorite tags' questions were highlighted in RGB (254, 247,220). Now they are highlighted in (255,250,236) which is much closer to white which makes them hard to spot in a whole page of questions.

There are two similar feature requests posts, here and here. Despite getting good response from community there is still no response on them after almost a year so I thought maybe I should raise this issue again as this is a huge problem especially for people with vision defects such as me.

Can we please make the highlight shade a bit stronger to help with visibility?

Please let me know if I should have stuck to bumping up the previous posts in this regard rather than making a new post about it. I will gladly take it down.

SO just lightened the favorite tags background last week so it wouldn't clash with the new green.

SO tweaked both the new green (so it wasn't as vivid) and the background (to avoid any optical illusions due to the two saturated colors). This was a reasonable compromise, and most seem to be ok with the final result.

Since the new color changes were important in reducing the size of the CSS, an better solution at this point may be to employ a user script to customize any colors to your own individual requirements.

With regard to color blindness:

I don't know if it's possible to come up with a palette of colors which would be distinguishable for everyone, yet also be visually effective and pleasing, but it's something the designers have likely considered.

If the site colors do pose an issue due to color blindness, you should make a specific post about that, showing how the site's colors would appear for specific types of color blindness.

Not the answer you're looking for? Browse other questions tagged feature-request design tag-watching .

337
New Navigation Release Candidate
100
New Styles? New shade of green for accepted answers? It's not easy... being green
53
Could the new green color for accepted/unaccepted questions be tweaked against yellow favorite/ignored tags background?
44
Color for [favorite] tags questions on new SO design needs to be stronger
35
Darker color for favorite tags
4
Favorites highlight color and status answered color are too light