Edit rejected because it contains too much code

I stumbled with this question, which is basically a stack trace for an error, but it contains all of the stack trace like if it was a quote (also I think the title is wrong) so I decided to edit it, changing the title and removing the quote syntax from the stack trace. I was unable to complete my edit as I was presented with this error message: 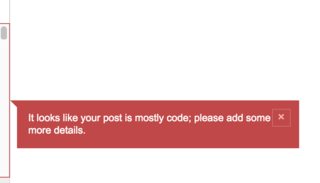 My question is, how was this question which has basically the same content as my edit able to be posted and my "more readable" edit is rejected?

The quote syntax was exactly the reason why the OP managed to post his question and your edit didn't pass. When the ratio between code and text is off that warning is generated. Using the quote syntax influenced the algorithm. Your attempt to fix that revealed the error again.

I don't think that question needed an edit to be honest. It is lacking details to be answerable and is nothing more then a logcat dump. It deserves a down vote and a close flag/vote.

Don't polish turds, specially if reviewers need to review your edit as well.

Not the answer you're looking for? Browse other questions tagged discussion edits specific-edit .

107
When is it okay to edit answers for “Code Formatting?”
4
Are edits described as “Format code” or similar automatically rejected?
21
Review on rejected edit
29
Edit to an old question cannot be saved because title too long
47
How should I have handled this rejected edit
6
Do minor syntax error edit suggestions get rejected and discouraged?