When asking, how much background info is too much?

I recently asked this question (Re-firing pointer events onto lower layer (for irregular-shaped dragging with interact.js)), which I just deleted because I decided the lack of attention probably meant it seemed way too specific/confusing.

I'm new to SO but not new to programming. I know this meta question seems to be asking for a kind of subjective answer, but I tried to follow the asking guide (https://stackoverflow.com/help/how-to-ask) to a T:

and I somehow still ended up with a convoluted question that nobody touched (I think I remember that it got some votes, but broke even, meaning some people disliked it).

In fact, when I came back to the question just now to try to edit it and improve it, I found myself making the problem more accessible by actually following these guidelines less. I started removing all the application-specific info about the irregular/transparent images, but then I realized the code sample and js fiddle would be harder to follow, and when I thought about wasting fewer words describing my failed attempt, the question basically became a carbon-copy of existing questions about pointer events, and it began to show little research effort. Unlike some other posters asking for help formulating questions, I don't think that my only problem was being too specific--there is lots of buzz on this topic (see: http://www.vinylfox.com/forwarding-mouse-events-through-layers/).

To be clear, I'm not offended that it wasn't answered--it hadn't been up for very long, it only got 16 views, and I'm by no means entitled to get help from a community of volunteers. I also don't think the question was perfect. I deleted it precisely because when I revisited it I thought it was confusing. Also, calling part of interact.js "buggy" sounds snarkier than I meant to be (thanks for the great, robust library, Taye!), I just meant that the library could not match my specific use-case here.

I'm just asking: Was I really including too much background info? Was I unknowingly falling short of the standards in other ways? Are the standards not as clear as they should be? Am I wrong to think that this is an issue at all? Any and all criticism gladly accepted. 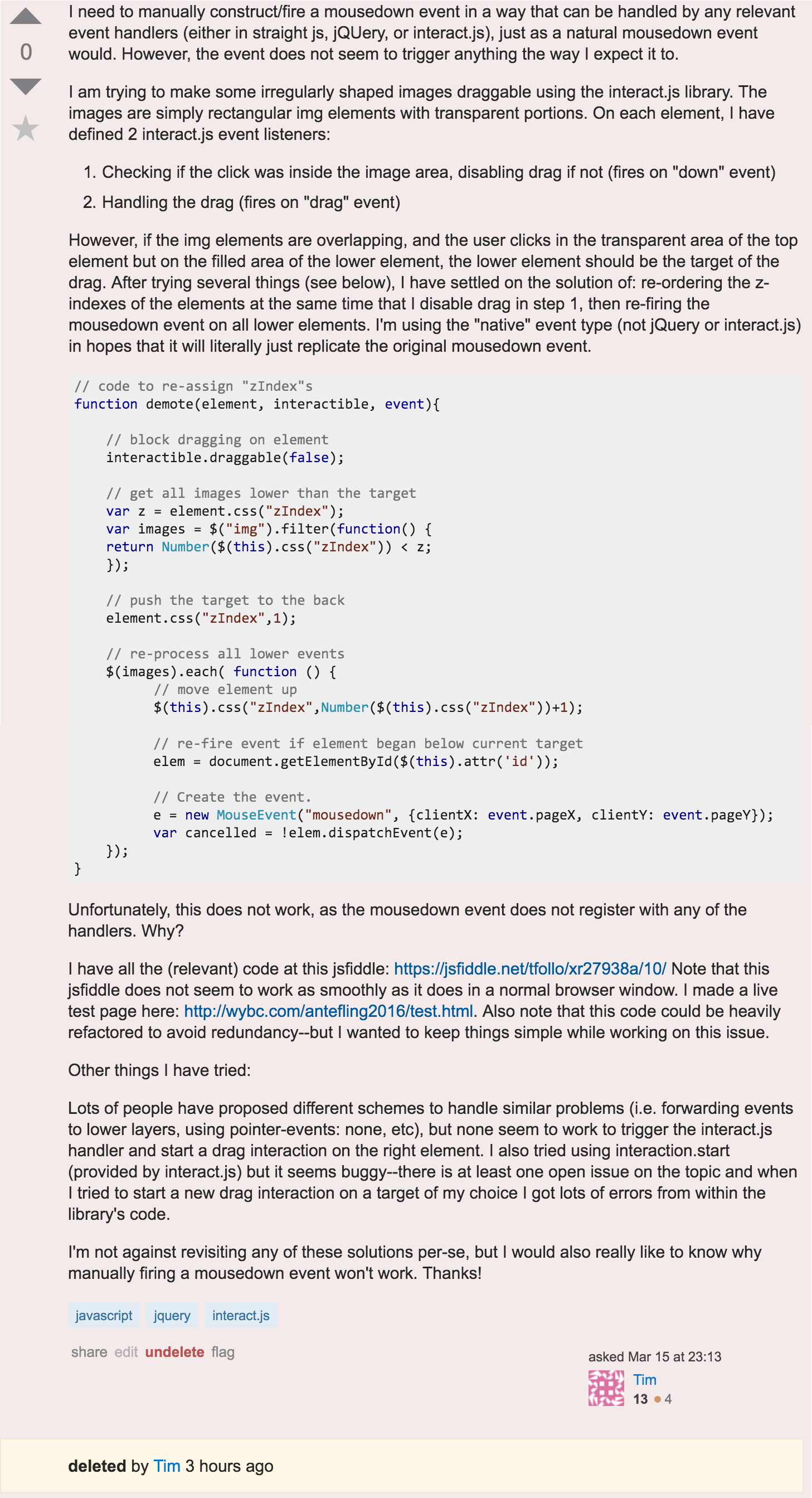 This is not a bad question. You obviously put a lot of effort into it, and it explains the situation well.

However, it does require a lot of reading to understand. Some people will probably be put off by the large amount of text and move on rather than answering.

One thing that I noticed is you really have two different questions here:

While this isn't inherently bad (often background information about the underlying problem is useful to avoid an X-Y problem), it does contribute to the complexity of the question.

I suggest you divide the question in two in order to simplify it. Ask one question about creating the mouse event and another question asking about alternative approaches. Include only the minimum relevant information in each, but make the questions link to each other.

You could start out by only posting the mouse event question, then add the other question if you don't get a good solution. Or, you could post both questions immediately.

24
How much do you want to know?
3
Is it ok to fix broken code in a question you asked so you can use that code (JSfiddle) somewhere else?
7
How much code is too much code to put into a question?
11
Doesn't "When asking" refer to "people"?
14
How to handle code requests without "too broad" close reason?