How many hours did you guys spend building UNIKONG?

Someone had to ask.

It would be nice to see a blog post on its development at some point. Must have been fun.

We started planning in late February. (Google Docs remind me that the initial "gathering ideas" doc had a deadline of February 21.) The idea for the game itself didn't actually come out of that per se, but we landed on that in early March (Google Docs sez... March 4th). At that point I began learning how to even make a game + looking at frameworks that may help us along the way.

At this point, no further Google docs were produced, so the timeline gets a bit hazy... but basically, I ended up settling on phaser.js as the framework of choice about a week later and started prototyping the game. The whole thing took about two weeks of me coding part-time + another week full-time, with Paweł making the artwork in about a week's time and Haney joining in in the last week to help out. (The leaderboard, a bunch of bug fixes, and any particle effects you see are Haney's fault handywork.)

Why part-time? I have the attention span of a squirrel and it is surprisingly hard to drop every other project/bug fix/day-to-day task to work on something brand new. I'm also not sure exactly what Haney's time split was, but we did end up pulling an 18-hour day this past Wednesday. Let's pretend it was to relive college glory and not a result of me getting sick at the wrong time and otherwise suboptimal time management. ;)

All in all, it's hard to put a precise "this took X hours" time on this, but it was in the ballpark of 3 weeks all told. I'm also happy to write up a blog post, though I'm not sure there's all that much to say there. "Phaser is a solid framework with good examples that will get you where you need to go. The rest is magic numbers, copy/pasting, and a designer who knows what he's doing." :)

P.S. I do plan to open-source the game in the near future. I'll update this answer with the link when that happens. 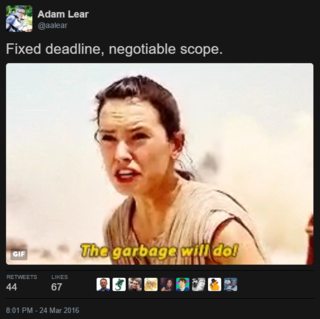 Worked out alright in the end, though. :)

Jon Skeet told the program to write itself.

27
Are there professional benefits to building reputation?
33
How do I know if I am a victim of serial downvoting?
56
Why do so many good programmers waste their time on Stack Overflow?
218
How do you know Stack Overflow feels unwelcoming?
56
Data science time! June 2019 and the Tumbleweed badge