What to do about hundreds of the same basic question?

For the umpteenth time someone asked the question "what does 'str object is not callable' mean?" with the tag [python]. This is a very common error for newbies, so it just gets asked over and over and over, each time in a slightly different context. A little spot checking shows that nearly every answer seems to get one or two upvotes, and the answers always directly address the specific code in the question rather than giving a more generic faq-like answer.

The best answer, IMHO, is to explain the meaning behind the error message ("what is 'str'" in this context, what is "callable", and "why isn't it callable", etc). I'd like to find or write a definitive answer but am struggling to find a good candidate. What to do?

Should I ask it once more myself, write what I think is a good general purpose answer, and then hunt down all the similar questions and mark them as dupes? Or, pick an existing answer? If the latter, do I pick the oldest? The one with the most up-votes on the question? The one with the most upvotes on the answer? If I find an existing question and answer, is it kosher to make substantial edits to make the answer more generic?

Yes, it's a good idea to either pick up an existing question or ask and answer a reference question of your own, as it will be exactly within the declared site guidelines.

No, it won't change anything regarding the number of basic questions asked and answered, as it will be against the actual modus operandi of Stack Overflow.

Although you may start using your own reference question for closures, other participants will hardly notice it, and will continue answering repeated basic questions instead of closing them. And even get on you for "not helping people".

You have to realize that Stack Overflow, with all its gamification stuff, is essentially after "getting one or two upvotes for the answers that directly address the specific code in the question".

Some people accuse me for being too pessimistic.
Some other people telling me tales how great Stack Overflow is and how it's successful in cleaning bad stuff. The problem is, I grew up in the Soviet Union, and for the rest of my life I am immune to this kind of tales, when people are trying to sell me things opposite to what I can see with my own eyes.

And my eyes are telling me that things are quite different. Instead of "being removed at a reasonable pace", bad questions rather get revived.

A fresh example. There is an exemplary offtopic question, of the usual "I wrote a code that doesn't work, fix it for me" kind.

You will never get enough votes to close it as offtopic, partly due to rep-whores, for which such a question is the best forage, partly to clueless reviewers, who is able to comprehend grammar mistakes only.

Yet, beside being off topic, this question is a duplicate as well. And here comes another dilemma. The closure reason could be either "a fish", or a "lesson how to fish". One could argue which is better, but at least both are legitimate. Especially taking into account the declared goals of Stack Overflow: to let many people learn from the single answer. From this point of view, the answer with "a fish" will help the OP only, while the answer with a lesson will help anyone.

Personally I prefer the latter one. So it was used.

So far so good. The answer for the OP is given in the very first comment; off topic question is closed; for someone else having a problem adding stuff in the database the answer how to get an error message is given. Happy end?

Not quite. After time being, out of a clear sky here comes a mod. And opens this post back.

This is a real Stack Overflow.

So don't sell me tales how well it is in cleaning a bad stuff.

To start with, yes, we should be closing these down. They're not useful questions. StackOverflow's goal is to be an information repository for people to learn from, not a free code debugging service. Questions at this level of specificity and that lack research are not going to be useful to other people. It is a completely appropriate action to close these as duplicates of questions that have answers explaining the real meaning of the error and how to go about fixing it. So as stated in the comments, find an appropriate dupe (or create a canonical) and start closing.

You have a gold badge in Python as well, meaning you can unilaterally close these. You might be hesitant to use this ability on such a large number of questions, but I would encourage you to go ahead with it. The close hammer has been called a "resounding success", and this kind of trash clean up is exactly what it was intended to aid with. If you need help, coordinate with other users (here, chat).

I do think that posting on meta asking about issues like this is a good idea. Given the sheer number of affected questions, this isn't something you want to start doing without making sure you're on the right track. Maybe we need a catchy phrase to describe these kinds of efforts, like tag removal has "burnination."

As for going forward, the efforts to clean up the existing mess may not stop the flood of incoming questions of this variety, but if people do bother to Google, they may find that a huge pile of results linking them to a single question to be a sign they need to read that question. It certainly can't hurt, and it may help a little going forward. It also establishes example behavior here for the users who are answering these questions; perhaps some of them might start flagging to close instead of answering. Bottom line: it won't end these questions, but it's a nice start in the right direction, and ignoring the problem will only allow it to get worse.

As a stopgap measure, I added the question suggested by Tiny Giant in a comment to the SOPython Common Questions database. I also brought this question to the attention of the python chat room.

The entry I added is still a draft (100 rep required): http://sopython.com/canon/98/typeerror-x-object-is-not-callable/

You are of course still free to propose a better canonical question; perhaps then similarly bring it up in the chat room first, and coordinate with the friendly pythonistas there.

I'm documenting this as an answer mainly because the Python community on Stack Overflow has an exceptionally active chat room and dedicated wiki for this sort of thing; you should at least know about them if you participate in this tag.

Yes, "str object is not callable" is a very common error. Sometimes the asker has masked the str() function by calling their string str. Sometimes they're just adding parentheses after a string for no apparent reason. A quick Google of site:stackoverflow.com python str not callable (I do this a lot; Google sometimes asks me if I'm sure I'm not a robot) seems to focus mostly on those two reasons. People who ask this question probably could have done a bit more research. However, they do not. Why, you ask? Fortunately, I have the following infographic for you: 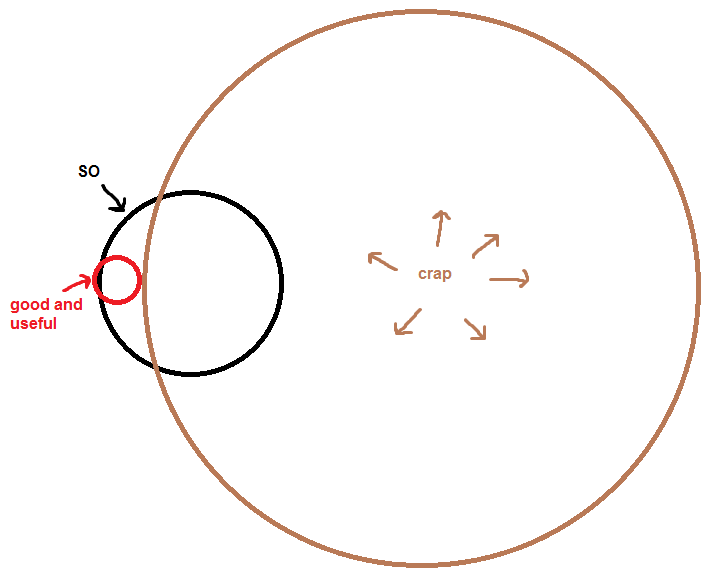 Most useful programming knowledge is on SO. That's why SO is so popular: if you're wondering something about how to program, you can probably find it here. It's great. Just the other day I found a delightful little snippet about how to add a tooltip to a widget in Tkinter with nothing but an import of an included library and a simple tip = Tip(widget, text) (oddly, a Tkinter question with no answer from Bryan Tcl/Tk Oakley :P).

But how about that other circle, the one I labeled as "crap" and colored an ominous brown? That is the bulk of Stack Overflow: the incredible mountain of Big Data delivered unto us by the 99% of programmers who don't know how to research any more than they know how to program. Sometimes they are not even programmers - they are professionals from other fields who stumbled upon an article claiming that "R is an excellent language for data analysis" or "Python is making a big splash in bioinformatics" and then dove into the deep end (either of their own volition or after their manager made it a priority zero key ask). Professionals or not, they still don't understand that you have to learn a language before using it, whether it's a human language or a programming language. It seems so simple at first: learn the magic words, write them, and it works.

Except when it doesn't. Then, instead of figuring "I better go back and learn this before using it," it seems much faster to ask someone to take a glance at the magic words. And whom shall they ask? I'll give you a hint: us. This is the crap, and it is flowing inexorably into SO via osmosis and laziness. We cannot stop it. All we can do is bail as fast as we can, tossing these questions into the duplicate pile, closing as too broad, closing as "off-topic for SO because this is your homework, not mine, and I don't care that you let it sit on your desk for a week and it's due tomorrow, I'm still not doing it for you," and answering for 2-3 points.

Note how the last option - answering questions - is the only way to get rep (past the couple thousand for approved edits), and further note how most of everything is crap. Logically, then, the most reliable way to boost your reputation on SO as a programming wizard is to answer crap and duplicates (I occasionally dupehammer questions after they've already been answered, and the person who answered the question I just closed is the same one who answered the canonical duplicate), because if you wait for gems you will be old and gray before you get anywhere on this site. This hasn't always been the case - after all, the very first person to post stupid question X wasn't asking such a stupid question, at least in terms of SO. Maybe the information they needed was easily available elsewhere (e.g., the change from print statement in Python 2 to print() function in Python 3 was available in the release notes, along with many less-visible changes), but it wasn't yet easily available on SO per se.

Direct answers to your specific questions:

TL;DR: As the VP of R&D at my old company would say in his heavy Middle-Eastern accent, "it is crap." But it's okay.

87
Is the dupehammer (Mjölnir) still being evaluated, and if so, what is the current outcome?
63
Let me find canonical questions
5
What should we do with "How to solve common errors in Google Apps Script development"?
17
Would it be appropriate to create a better duplicate?

54
What is the point of generic, language-agnostic tags about basic programming concepts?
35
What is the correct way to handle changing APIs?
44
What should I do about a lack of good canonical questions?
40
What, if anything, should be done about massive question duplicates?
31
How can/should we broaden questions where the same problem can manifest in multiple related ways, to make the most useful canonicals?