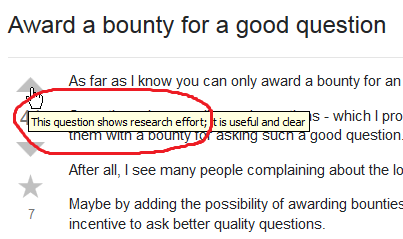 1221
Why is Stack Overflow so negative of late?
1102
Question quality is dropping on Stack Overflow
351
Enhance moderation ability by encouraging excellent content
33
What exactly is "artificial inflation of reputation", and where is the line?
209
Make philanthropic bounties a real part of site culture
-10
Badge or bounty to encourage questions and answers with good quality (pass an exam)

1
Longer duration bounties?
3
Improving automatic half-bounty rule?
1
Interesting in obtaining a SQL query to find most "bounty-deserving" questions
17
Are bounty questions that are too broad exempt from closure if they have good answers?
25
Make attempted close votes on off-topic/unanswerable bounty questions raise a separate kind of moderator flag