Brad's comment is the only worded dissent I have read, yet there are many downvotes. If you disagree with me then please explain why?

I am asking that the automatic posting of a comment should be made clear before it happens. To me, downvotes here seem to be saying that those comments should be kept a secret, which is bizarre

I always overwrite this and explain myself in several sentences. I have never seen my reason for closure displayed as a comment, so I can only guess what the criterion may be

This needs to be fixed, either by informing the user clearly that their words will be made public, or by stopping the automated comments

I get this prompt

and more often than not the case isn't covered by the six pre-written choices. (I could submit a question to Stack Overflow about being unable to peel an orange, and it wouldn't be excluded by any of the main options. It's disgraceful.)

So I select the other category

and I get a text box pre-filled with

I'm voting to close this question as off-topic because

I tend to use the off-topic/other category to explain myself when none of the other labels seem to fit. In such situations I feel that I should explain myself, and so generally take two or three sentences to phrase my submission, and I have never noticed a situation where my ideas have been published as a comment

I suspect the automation depends either on the length of the text or, more likely, on whether it starts with the stock pre-fill I'm voting to close this question as off-topic because

Stack Overflow is full of stuff like this, and it is inappropriate. You can't, and shouldn't try to, automate human ideas and opinions. At the very least, contributors to the site should be made aware that their votes and thoughts will be made public

I think you are being confused between what close votes are for and what other flags are for. Close votes are not the same as moderator attention flags. Any 3k user can vote to close questions they feel are off-topic on Stack Overflow. In this context, as many of the comments have pointed out, everything is public. 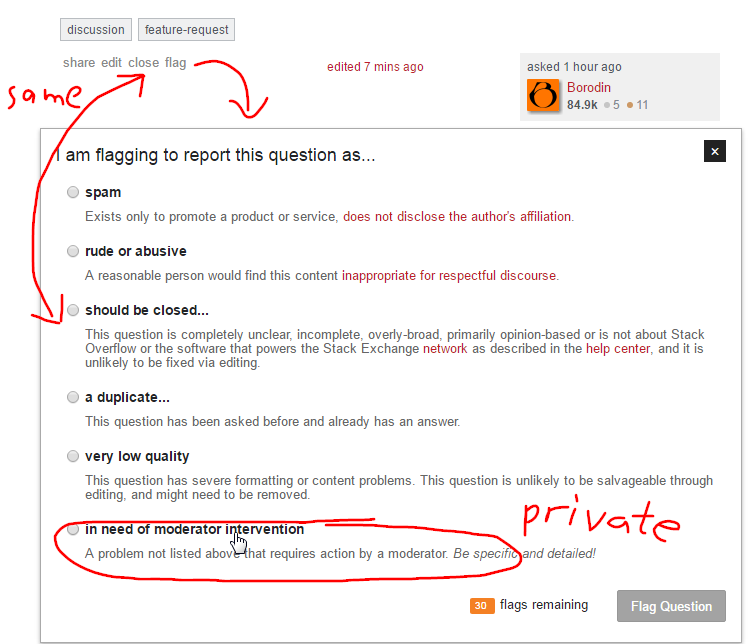 Even though you can "flag" a post for closure, you're not really flagging it for a moderator at all. You are actually casting a close vote instead since you have the 3k privilege. Both the "flag as should be closed" and the "close" link have the same effect of casting a (public) close vote.

This is completely irrelevant and should be edited out of the post it appears in. If you felt it warrants extra attention, you should use a custom moderator flag (and the bottom of the dialog). Custom moderator flags go directly to moderators, and those messages/details are indeed private among the moderators.

Maybe the text could be even more explicit, but when we select the "Other" category the text says (my emphasis, quoting your quote):

That doesn't compute with the statement "I have never noticed a situation where my ideas have been published as a comment".

I see that category selection as the system telling us we're going to add a comment. It's kind of DNA of the site, we post Questions, Answers and Comments. 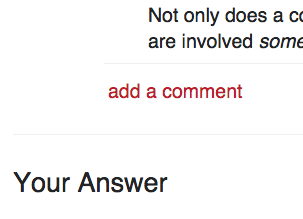 62
Auto-comment close votes for all close reasons
9
I don't like sounding like a tattle-tale
59
Is there no automatic throttling or banning of users who repeatedly post profane comments?
23
How is this question "not even close to being off-topic"?
67
Retiring Our Community-Specific Closure Reasons for Server Fault and Super User