There is a problem with the way the survey is reported: ages in section IV. Age are represented in 5-year bands up to 40, after which they're reported in 10-year bands. This skews the chart to artificially lead the reader to believe there are more developers in those age ranges than there actually are. You need to not change the banding - put it all in 5-year bands, or all in 10-year bands, but you can't do both and be believable.

This same problem reappears in the portrayal of Female Developer Age.

A similar problem occurs in the Experience tab of section VII. Salary, wherein those with less experience are weighted more heavily in terms of the graphical elements allotted to them.

EDIT: I'm adding an example of how the data is presented now (well - mine's vertical, rather than horizontal, because I think it's more readable that way) and an example of how it could have been displayed (made up the data from what was there, so the elements in question sum up to what was presented). 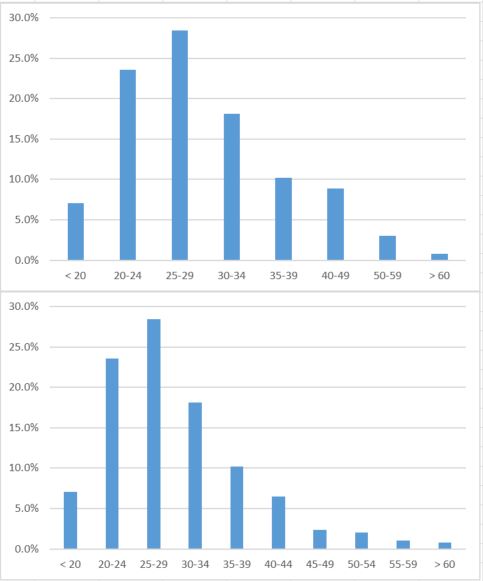 When doing a first take of the graph at bottom, I have more of a feel for just how skewed the workforce is towards those below 40. When I look at the one above, I somehow feel that the older age bands aren't so underrepresented, even though I know this intellectually to be untrue.

Good catch. We never intended to be deceiving. The age ranges displayed are just an artifact of how we asked this question in previous years, with less granularity in certain age ranges than others. 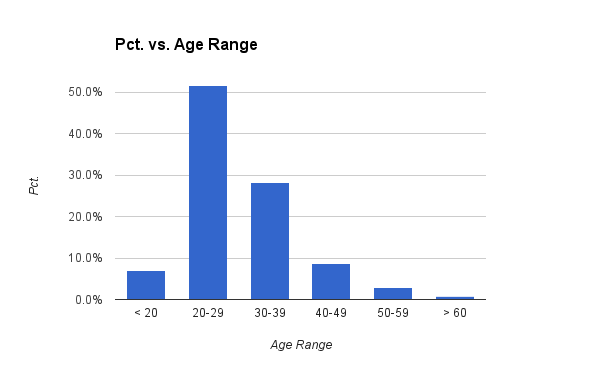 One interesting takeaway from this presentation: more than half of all respondents are in their 20s. You couldn't tell that from the way we laid out the chart this year. Next year we should probably reformulate the question to get more granular age data.