I've seen a lot of questions tagged with regex and no additional tags. These questions are often impossible to answer because regular expressions are so dependent on their engine's capabilities. Sometimes you can guess from the question or code sample which technology is being used, but often you can't. This reality is clearly recognized by the tag authors as the description practically pleads for users to add another tag with the tool or programming language implementing the regex:

There are many different dialects of regular expressions, all subtly different. Therefore, when asking questions, always include the tag for the specific programming language or tool (e.g., Perl, Ruby, Python, Java, JavaScript, vi, Emacs, sed, Lex, grep, etc.) you are using. Otherwise, you may get answers that won’t work for you.

Then I read the old blog post about the Death of Meta Tags:

Meta-tags are actually a subset of a larger problem that I usually call dependent tags. These are tags that don’t say anything by themselves – you can’t tell what the question is about unless they’re paired with some other tag (or several of them). These tags are a problem because people don’t realize this and will often use that as the question’s only tag.

While regex does, technically, "say something", it usually doesn't say enough to answer a given question.

regex seems like a very problematic tag. While it can barely stand on its own (most often it can't), the only other solution I can think of would be to create dozens of [tool-regex] style tags (which is very ugly and presents its own set of challenges):

Is it worth splitting up the regex tag in multiple tool/language-specific tags? Or is it better to have a single tag which must nearly always be dependent on some other tag (whether supplied explicitly or via a comment)?

WHY BOTHER?
(Bringing some of the issues raised in the comments up to the question level...)

In some cases, however, an answer is offered (often by someone with little knowledge of regex engine differences) and, by luck of the draw, the given regex works with the OP's implementation. In such a case, you have something even worse then a question with no answers: a question with an answer that is virtually worthless to future visitors. With such questions/answers, it's a crap-shoot: it'll either work with your regex engine, or it won't (which, to a "newbie", makes it look like the answer was wrong). In my opinion, the quality of the SO site suffers when such questions are allowed to proliferate.

From the discussion so far, it seems that there are four options:

Personally, my vote is for #3.

A while after this question was asked, we added just-in-time help for sql: 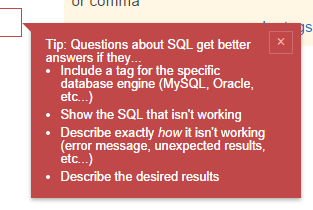 And regex was even suggested as a natural candidate, both to require examples of text that should and should not match, as well as the tool in use (in comments).

Adding regex tag help is easy enough that we ought to try it and see what happens.

You completely misunderstand the concept of meta-tag. A meta-tag is a tag that provides no information about the subject of the question, but only about the question itself — something like beginner or subjective. regex is not a meta-tag. It doesn't match the two typical telltale signs of meta-tags either:

The difference between a .net-regex and a php-regex is microscopic. There's no need to have different “regex for phone number” questions in each of these.

There's a lot of dross in the regex tag, but spreading it around won't solve anything. It's rather the opposite: there's not nearly enough closing of duplicates — and if you split the tags, that'll only make it worse.

While I agree that this is indeed a problem (and especially with regex), I don't think getting rid of the tag completely would be a practical approach.

The reason for this is the amount of tags that, like regex, cannot (shouldn't) be the only tag on the question. Consider csv, json, file, io, gui, etc. Probably, the majority of SO tags fall into the same category (pretty much everything except the language tags).

Taking this into account, I don't think it would be reasonable to undertake an insanely massive retagging of all SO questions (and I'm not sure it would even be deterministic). Also note that it would lead to a manifold increase in the total number of tags.

What could be done in my opinion is implementing some sort of constraint that would prevent posting a question if it's only tagged with "secondary" tag(s). Then this attribute of a tag (primary/secondary) could be subject to editing as a part of the tag wiki, for instance, or maybe with its own reputation requirement.

Note that the necessity of this measure is highly debatable, I am not exactly positive that it is needed, but it is what seems to be a sensible approach in my opinion.

Edit: in response to your edit, I agree that solution #3 (a pop-up or some sort of hint when tagging) would be the best.

I think splitting the regex tag into multiple tags is overkill for a problem that already has a solution (add another tag). Splitting the tag would make matters worse for a large class of current questions tagged regex.

In this case, a general answer is provided which works with most regular expression flavors, but it's impossible to know if it will work for your problem since you may be using some weird regex flavor. It has very little value for other visitors and may even be perceived as 'wrong' if the visitor knows little or nothing about differences between regex implementations.

If the general answer works for most regular expression flavors, then tagging the question with a specific flavor still isn't going to help the person using some weird regex flavor, and it may turn away people who are using one of those more common flavors.

The following argument doesn't hold a lot of water either.

In some cases, however, an answer is offered (often by someone with little knowledge of regex engine differences) and, by luck of the draw, the given regex works with the OP's implementation. In such a case, you have something even worse then a question with no answers: a question with an answer that is virtually worthless to future visitors.

Except for all of the people that it does work for. That's not worse, it's better. If someone using a different flavor of regular expressions finds that answer, they can ask a new question (tagged appropriately) about why it doesn't work for them.

I wouldn't be against suggesting that a user add another tag (or even forcing them to) if they try to post a question with only the regex tag. People are already doing this in comments, so we might as well automate it to make it a little bit easier to answer these questions to begin with. However, I think splitting 50,000 questions into many different tags would cause more problems than it solves.

The SQL tag is like regex in this regard. There are many SQL dialects and many queries are written quite differently in MySQL or SQL Server.

This is not much of a problem as most questions include an example query or client technology that gives away the dialect. (F.e. "top 1" vs "limit", and C# usually goes with SQL Server.)

Not the answer you're looking for? Browse other questions tagged discussion feature-request tags .

279
Help the helpless with how-to-ask tag tips
11
Regex tag synonyms
4
Documentation: Has there been any discussion around related/linked documentation topics?

38
The famous tag regex answer: Should its title be edited?
87
Provide asking instructions for [regex] - just like for [sql]
38
Can Stack Overflow notice a regular expression question and maybe suggest something apart from other like questions?
69
Recognize synonyms of “regex” in question title
9
Should I edit in tags for the right topic?
40
Are text editor regex questions off topic?
15
A rollback war about [regex] tag
3
Do I need to describe what parts of the language I use?