Should we have a way to migrate halfway OK looking questions to main?

During the process of closing/deleting this question, I noticed that I could not suggest migration to the main site as I originally intended to do.

I voted to close for being off-topic instead. After that I noticed that @πάντα ῥεῖ left a comment related to the missing option for migration.

I guess only high-rep users can see deleted questions, so here's a screen shot of the comments after fiddling with the CSS to make them visible again:

I thought: Let's not hide feature requests in comments of deleted questions, but discuss them openly on meta.

The concern was that this could undermine existing bans on the main site. I guess there could be a check if the user is banned there and disable the migration option.

I modified the dialog with the migratin options of the main site to illustrate this idea: 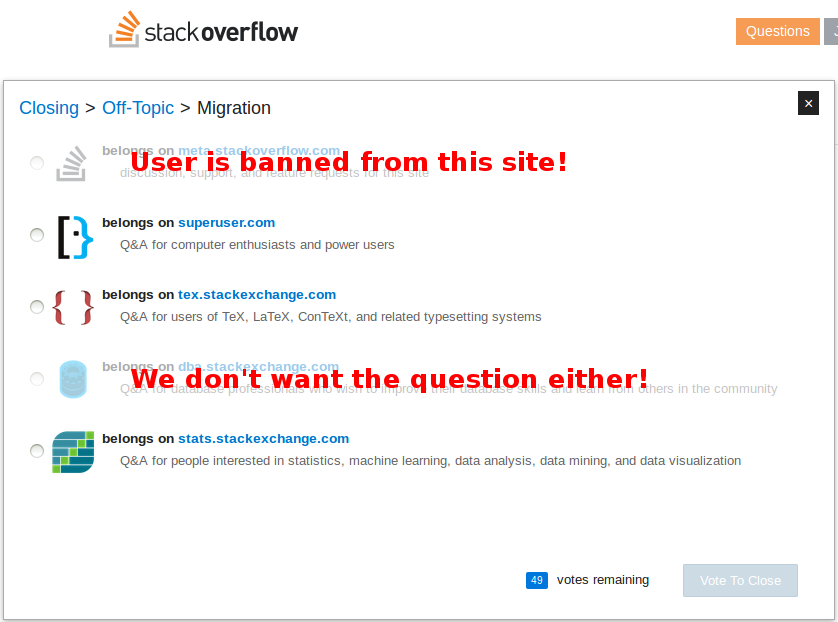 The actual text and way of representing the disabled migration possibility is not final obviously and just a dummy.

I'm not that active on meta and cannot tell how often this happens. An answer with some statistics would be nice to help estimate if it makes sense to implement it in case this feature is considered desirable.

Furthermore, I guess that implementing this requires the information of a user being banned to be public. At least to those users able to cast close votes on sites that have a migration path to the banned site. I don't know if that's the case at the moment and/or if it's a problem to have it.

No, we don't need this option. If a user can't tell the difference between Meta and the main site, the odds that their question is worth migrating are exceedingly low. In those very rare cases, we can just leave a comment to let the person know that they posted on the wrong site. 99% of the time we don't need to do this.