Who should ensure job advert tags "do their job"?

Should we have some kind of community moderation - even a flagging system, for things that appear incorrect or maybe even harmful* on Stack Overflow Careers, and is there already some kind of vetting process for adverts being posted?

* harmful to the image/repuatation of Stack Overflow, not "slap in the face" harmful.

Discussions around the tags on job adverts are not new, but where irrelevant tags are being used - who is ultimately responsible for correcting these?

If it was a post on an SE site, then the community would address such things to ensure that the content of the site stays relevant, so on the careers site - should we have some element of community moderation for things like this?

As far as I'm aware (forgive my ignorance, happy to be corrected) only SO employees and the company themselves have the ability to edit these tags. I can understand this as the company are paying for an advert so I'd be upset if something I'd paid for was liable to being defaced/edited/removed by a bunch of strangers. But I think if it's something that's aimed at us as a community, we should have some kind of moderation or feedback system that doesn't involve having to post on meta about it and draw red circles around things.

Our account executives and support team work very closely with customers who post job listings through us, and they often provide edits and feedback on the job listings (sometimes before the job goes live and sometimes after).

We actually already do have a feedback mechanism for the community, though it may not be as comprehensive as what you're imagining. On the right sidebar of every job listing, there's an option to "flag a problem". You type in a short explanation of what's wrong with the post, and a human being reviews the flag. They'll work with the customer if something is, in fact, wrong. 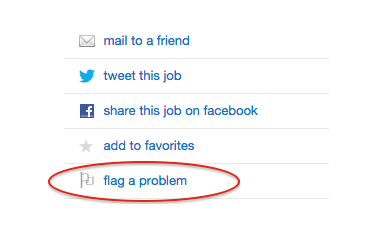 It's extremely unlikely that we'll allow community editing of job listings; as you mentioned, they're a paid product, and most companies do put effort into crafting their listings in a very specific way. It just simply doesn't work the way other content on the site does.

Not the answer you're looking for? Browse other questions tagged discussion jobs advertising .

0
Any way to edit the Job tags?
2
Relevance of tags on job postings