For some reason Stack Overflow stopped working for me in Chrome. I can't comment (when I press add comment, it just scrolls to the upper part of the page), the achievements button shows nothing first time I press it, and when I try again it shows information, but it is misplaced.

I tried it on several computers (with different Google accounts), and I've tried it in guest anonymous mode (to ensure no Chrome application is doing this), but I still have the same behavior. I've tried reinstalling Chrome, but it didn't help.

It works OK in Mozilla. I don't think it is caused by Chrome itself, because if it was like that, many people would have experienced that, so it's probably something special to me.

Tags also doesn't seem to work for me (no list, but I can enter something). Any tips how could I fix this?

Example of "achievements issue" (after I clicked it twice. The first time it just shows the lower pane as loading): 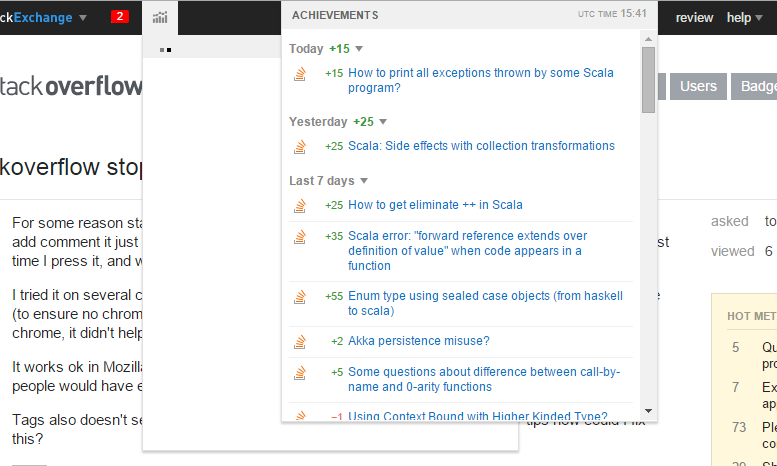 But I am more worried about not being able to add comments - as this is a functional issue. Also I've noticed that a lot of other things are not working. I can't press show more comments, etc. JavaScript seems to be working OK in general.

Chrome Tools reports TypeError: $.cookie is not a function.

I jumped the gun and thought Adblock was the issue for me.
Disabled the extension and everything went back to normal.

But after a reload the same issue still remained.

Went through all extensions one by one and found that Couchpotato was the culprit. Apparently it injects ads on keywords which then Adblock tried to remove and breaks the sites functionality.

If you installed the userscript named StackOverflow Hide Jerky in Tampermonkey chrome extension, just delete it and adding comment will be back.

76
Cannot create Stack Snippet
9
Occasional failure to save when improving a question using the Snippet Editor
13
Cannot comment on own question or its answers - is this a bug?