Should [perl6] questions be tagged with the [perl] tag as well?

In How is this Perl sensical, considering Perl 6's type system?, the question was initially tagged with both the perl and perl6.

I untagged perl, but @ThisSuitIsNotBlack pointed out that the perl tag wiki lists both the perl and perl6 tags.

Should perl6 questions also get tagged with perl?

In my opinion, no they shouldn't be tagged with perl, because perl6 is a different language and knowledge of perl5 does not necessarily imply knowledge of perl6. If users wish to answer questions related to both perl5 and perl6 they can subscribe to both tags.

Perl 5 and Perl 6 are effectively two separate (but closely related) languages at this point. Any nontrivial question, and its answers, will be specific to one of the two languages. Combining both under a single tag doesn't make sense -- it'd be like using c for questions about c++, c#, and objective-c.

(Using perl5 for questions about Perl 5 would be ideal, but perl is already commonly understood to mean Perl 5. There's no practical way of fixing that now, so whatever.)

The first official release of Perl 6 was announced in December. Suddenly Stack Overflow is getting more Perl 6 questions: 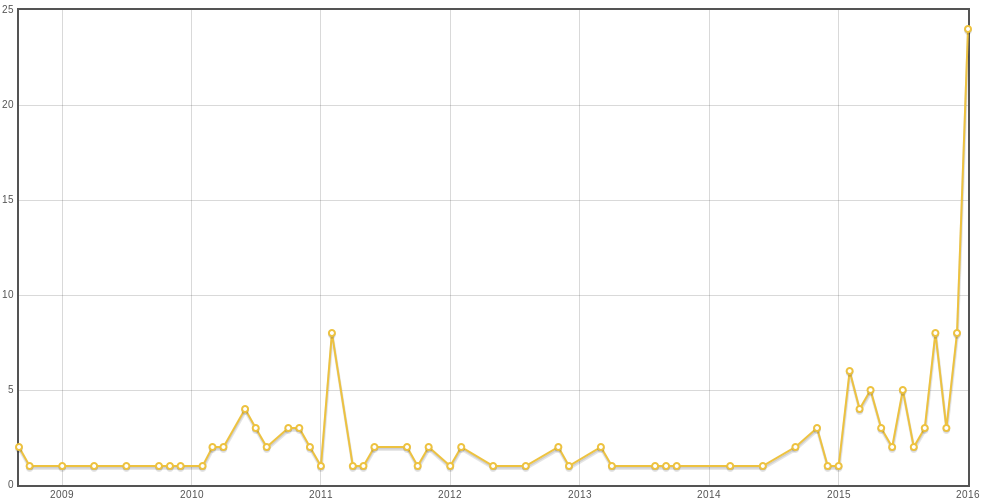 This comes after 15 years of parallel development, and 21 years after the first release of Perl 5. In that time, the word "Perl" has become essentially synonymous with "Perl 5" in common usage.

However, as Perl 6 gains popularity, it will start to be picked up by developers who are unfamiliar with Perl 5. These developers will call their Perl 6 programs "Perl", and they will automatically add the perl tag to their Stack Overflow questions.

At some point, there will be enough Perl 6 code in the wild that "Perl" no longer unambiguously means "Perl 5", but instead could mean either "Perl 5" or "Perl 6". In anticipation of that time, let's allow perl6 questions to also have the perl tag.

By request, I'm posting this suggestion I originally made in the comments as an answer, in order to gauge community support for this idea.

Given that we now have two quite different languages called "Perl" in active use, it might make sense to start treating perl as an ambiguous tag. Specifically, this could entail:

This way, users typing "perl" into the tag box would be presented with a choice between perl5 and perl6, and would actually have to choose one or the other (or, in rare cases, both).

Only perl6 for questions only relating to Perl 6.

Both perl6 and perl for questions relating to both Perl 6 and Perl 5.

Also, anyone wanting to see questions tagged perl but not perl6 can search for [perl] not [perl6], thus:

Part of the tagging problem may be that people using Perl 6 still think of it as being "Perl". Both Perl 5 and Perl 6 are "Perl" in philosophy and style. Perl's whole goal is to make programming problems easier and more natural to solve. It lets you think of problems in your own way and let's you program in your own way. If you love Perl 5 for its "Perlishness", you'll know what I mean. Perl 6 is even more "Perlish" than Perl 5.

I frankly think the perl tag should be banned from Stack Overflow, or be an alias for perl5.
( On other Stack Exchange sites it may make sense to still allow it separately )

Here is just a quick example

If you wanted to print more about the version you are using:

(I used the Javascript highlighter to get some color without choosing Perl 5 highlighting over Perl 6, that's why there are // for every comment)

Those are just the simple examples, the following is valid Perl 6, but invalid in Perl 5.
Not to mention that it would be much more work to even get something that remotely works similarly in Perl 5.
(Probably using an overloaded class for the string argument, or a module that allows you to hack into the parser.)

There are modules that you can and should use to get very close to the default in Perl 6, which I would absolutely recommend using if you don't have a good reason not to.
I don't consider them not coming with perl that good of a reason.

The reason I think it might be okay for perl be an alias to perl5 is that Perl 5 is almost completely backwards compatible to the original version of Perl released in 1987, and is what most people really mean when they say Perl.
( Most of the things that were removed or changed you shouldn't really use, or not that well designed to start with. )

Using C++, my advise is tagging with [c++] if it is a general C++ question and using [c++11] and [c++14] only for questions that are really specific about features introduced by these versions.

So I would tag everything that is Perl with [perl] and if you have a specific need for either version 5 oder 6 use [perl5] or [perl6]. As these are sub-sets of [perl], I would never tag a question with [perl] and a specific version.
It might be, that Perl people will disagree.

23
Disallow the tagging of questions with both C and C++ tags
57
Should I not use the generic tag if my solution is limited to a specific version?
61
We gave [bootstrap] the boot, but it wasn't heavy enough!
20
Should there generally be only one tag for a language, rather than multiple (especially minor) versions?
10
Make [perl5] an alias for [perl]

127
Should we burninate the [jetbrains] tag?
37
Should the tags rdbms and relational-database be merged?
38
Proposed update to C and C++ tag usage wikis
25
Synonym Perl6 and Raku