Mod not doing his job

A recent answer of mine in the C++ tag accumulated a host of hostile comments from some user, accusing me of going after “low hanging fruit”, of duplicating some unspecified existing answer (i.e. plagiarism), etc.

I flagged the first comment and posted a comment that I flagged it, and considering the personal attack I included the info that I thought of the user as a sh******g, just for good measure. I expected some mod to delete both comments, and maybe reprimand me for being so frank instead of devious. I.e. I expected the flagging plus comment-to-be-flagged to work to both remove the noise and maybe reduce the guy's enthusiasm for generating such noise. Indeed that comment was upvoted by someone.

Then followed a barrage of further attacks, with the mod deleting my comments that I'd flagged them.

I have no quarrel with a mod deleting my comments, indeed the first was designed to be deleted, and all were expected to be deleted: I expected all that commentary to be deleted. I do have a quarrel with that mod not working to reduce the noise level, and leaving misleading, personal attacks. It's not what a mod should do. 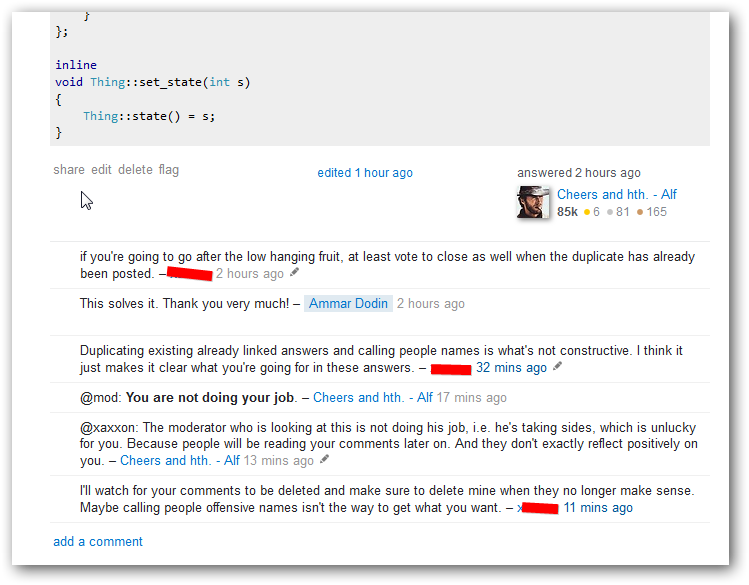 Actually, a mod was never involved (until just now; more on that momentarily). The comments in question were all either (1) deleted by the person who wrote them or (2) flagged by the "Community" user as offensive and effectively deleted automatically because they were obviously abusive or obscene.

Now that you have posted about it on Meta, though, a mod has gotten involved - namely, me - and removed all of the comments, not one of which was both constructive and non-obsolete.

The moral here is pretty clear: If you don't want your comments to be deleted, don't post useless or offensive comments.

if you're going to go after the low hanging fruit, at least vote to close as well when the duplicate has already been posted.

This comment, in and of itself, is not offensive. It's not a personal attack; nay, it's an attempt to (rather politely) ask you to help out closing duplicates. There is some debate about whether we should be answering these; that's irrelevant here and I won't go into it.

I can't speak for any other comments the user may have made. If they legitimately said something offensive to you in a later, now deleted comment, is something only a moderator could say.

Now, the crux of your question:

I expected all that commentary to be deleted.

It's vital that you make it known in the flag itself that you think all the comments there can be deleted. The comment flag UI is... somewhat painful, and isn't conducive to seeing context easily:

We have to click through to the post if we want to see all the comments. On smaller sites, I have the luxury of doing this for every flag. On large sites like SO, I imagine that moderators tend to delete clear-cut comments directly from the dashboard - remember, we're talking about hundreds or thousands of flags on a daily basis.

That can, and should, be improved, but at this point we just need to work with the moderators on it. Making life easy for them is good for everyone, and avoids miscommunications like this.

If you believe a moderator should do something specific, make it clear in the flag text. Either use a custom flag on the post itself or write custom text in a comment flag.

I know this can be hard, but when it looks like one of these situations is about to break out, the very ground beneath you becomes an event horizon.

Unless you're amiable to the idea of mutual spaghettification, where you combine in very strange, yet intimate ways with the combatant, you have to pull the emergency escape lever which is this:

This line of discourse has derailed; I'm alerting a moderator to clean up the mess we've made and not participating in it any longer.

But then you really do have to walk away, or get sucked in, pulled apart, and combined with them into angry pasta.

If you feel like you need to do more, replace the ; with a , — then let out a sinister laugh and be delighted with the knowledge that you hit them with a comma splice.

48
Are we abusing our delete votes on Meta?
82
Could high-rep users help with clearing comment flags?
3
How to handle this situation?
44
Relevant comments keep getting deleted at the OP's request
38
Help understanding declined flags: link to sale, NAA, request to help commit a crime
30
What happens when I flag an unwelcoming comment in a blatantly poor question?