With the site now well into its seventh year, there is a solid field of users with a lot of reputation points and nothing really to do with them except, well, amassing even more of them. 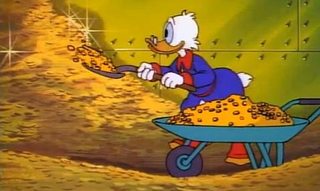 What if we could put those points to an actual use - encourage the improvement of existing questions and answers, especially canonical ones, and provide an incentive to go that extra mile of research where it's needed most?

Stack Overflow currently doesn't really provide a real outlet to do that.

Sure, there are bounties and the altruist badge, but the bounty system was originally designed to encourage answers you need urgently for your own questions, and it shows. There is no real infrastructure around starting bounties as a "philanthropic" act - bounties you start with no interest of your own, perhaps even in tags outside your domain knowledge.

Individual users are trying to work around this by expressing their willingness to bounty good questions (example) and yes, in theory there could be chat rooms taking up the role of the "nominated" tab - but without some active support from the system, it's all going to go nowhere.

1. Create a tab with bounty-worthy questions

In the question tabs, next to the "bounties" button, establish a "nominated" button.

The "nominated" view is nothing but a list of questions that the community has deemed worthy of receiving a philanthropic bounty - in the hopes that someone with a lot of rep will answer the call (see step 2).

Users with a philanthropic interest in a certain tag can filter the list, as usual.

Any question on the site with a net score of 2 or more gets a new link:

The idea is that the stewards of a specific tag - those who can recognize a hard question, or a frequent question that could use a great, canonical answer - can, by nominating questions, send up flares that say "these questions could use someone to sponsor a bounty on."

Create a number of serious philanthropy badges - bronze, silver, and gold. The gold one could be for spending, say, 10,000 points (or more!) on philanthropic bounties.

Tweaks and side notes

This idea would emphasize a new aspect of community culture that we haven't had before, but I can't really see any serious drawbacks. The danger of abuse (like, someone trying to steal a bounty through sockpuppet voting on a spurious answer) is as great as it is currently; with five community members actively expressing their interest in a question's well-being, and being available for clarification, one could argue the danger is even smaller.

This would also enable semi-alumni like myself - people who love the site, used to be very active, and have lots of points, but no longer the time / inclination to participate much - to continue to play a positive role around the place, and even re-distribute points a bit to new generations.

Perhaps this could even be sort of a new achievement level in the game that is Stack Overflow.

A quick workaround with no Stack Exchange developers actively involved:

Sponsors would get an accepted answer in their profiles, increase their philanthropy tag score, bronze/silver/gold philanthropy badge after a time, etc.

Related Meta Stack Exchange post: The Complete Rate-Limiting Guide (so I think it can be implemented)

2] If someone creates a nomination for their own / their friends post in hope to earn more reputation and tag score and if that post isn't really good the effect can be negative: the Stack Overflow post would start to attract downvotes which defeats the purpose of cheating.

Another quick fix for badges (offer ?3): Allow to award the Altruist badge multiple times (requires some Stack Exchange developers' assistance; it can be done in a batch for existing altruistic bounties).

And now just look at the numbers:

I have composed a query to find bounties awarded on another person's question.

I seriously thought that maximum number of altruistic bounties from one user would be from 6 to 8. It turned out that I was wrong.

A list of users who have more than 20 such bounties:

Peter Hosey sponsored 40 uber bounties [+500]. He also has two Altruist badges (together with lock, Jack and MrDatabase who has 3).

What's the point of pushing canonical questions even further? Don't they get enough praise from search results?

And don't we have other means to improve those anyway?

I think there are certain questions that are inherently unattractive to be answered, because it takes more effort to answer them. Some of those questions often involve different technologies and their interaction. If I see a question like "How can I use library X to connect to database Y with hardware Z with requirement A?" then I usually do not even bother looking at it. Especially not if I don't even know half the words they are tagged with. If it's unlikely that I can answer the question, I have no motivation to interact with it in any way. "Good luck finding somebody who can answer that!"

If that statement changed to "Wow, if somebody goes the whole nine yards to answer that beast of a question, props to him/her!" Or rather "...rep to him/her!", then I think some questions that do not have answers now, could get one.

In order for this to work, the mentality has to change, too and I'm not sure if getting another badge will do that trick. After all, this transforms amassing more reputation into amassing more badges.

I like the idea of bringing attention to certain questions/answers (+1), but I don't think canonical questions are those that need it most.

Personally, I'd rather see a feature where you can nominate/vote on questions getting bounties applied by the site. In other words, a site like Stack Overflow, for example, would award maybe 50, 100, etc. reputation points to the accepted answer, rather than the standard 15.

In this way, anyone in the community could participate (after reaching some sort of reputation points threshold TBD), whether or not they felt like they had an excess of reputation points of their own. This could also fit pretty easily in the existing review queue infrastructure - just add a new category of posts that are nominated for bounties, and then users could review and add their support from that queue.

2920
Warlords of Documentation: A Proposed Expansion of Stack Overflow
351
Enhance moderation ability by encouraging excellent content
115
Can we blow away some of the Tumbleweeds?
33
What exactly is "artificial inflation of reputation", and where is the line?
25
"Question Badge" suggestion: Philanthropist
70
Award a bounty for a good question
-16
Can we add our own points to an active bounty anonymously?
-23
Better Bounty System for Other People's Questions

38
On dealing with the misuse of bounties
1
Longer duration bounties?
1
Why aren't bounties visible anymore?
3
What are "Active" bounties?
3
Filter and sort bounties after new update?