I have the feeling someone was deliberately downvoting me and started research about what to do.

I was thinking, that I have only 2 downvotes, so I'm not sure if the "bot" (referring to @Ken White's comment from the first question) will see it as deliberate downvoting or not.

So before asking for moderator attention (referring to @Brent Washburne's comment on the second question) on my 2 only upvoted questions, that got downvotes, how can I see if my assumptions are correct?

Those down votes are too far apart in time to be considered malicious. They will not be detected by the voting reversal script (which someone refers to as The Bot). Two votes is not enough for any human, bot or script to spend time on investigating if something beyond the rules happened. You'll have to live with the burden of two down votes by some strangers on the internet. 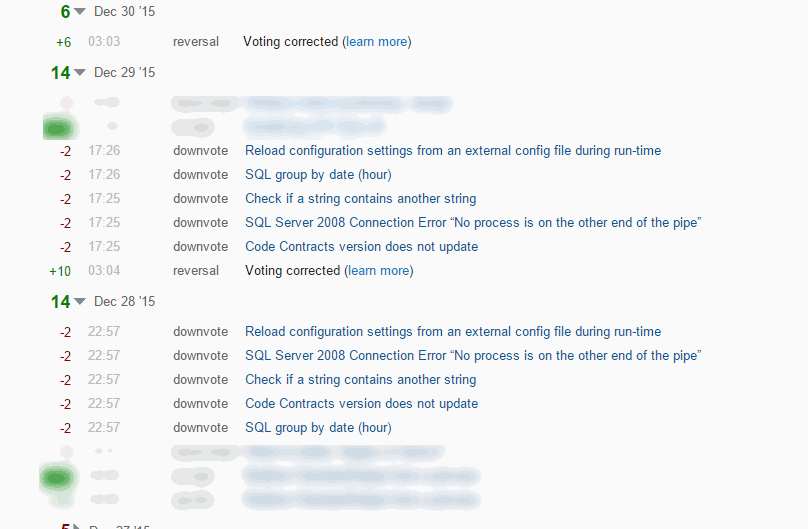 And no, I didn't report that because I tend to annoy users now and then and this is the price I pay.

Moderators cannot see who down voted but they can see patterns. If they find enough evidence that warrants further investigation they defer the investigation to a Community Manager, an SE employee, who can use extra tools to underpin any suspicion which may include querying the production database.

252
What can I do about getting a sudden flood of revenge downvotes?
149
Can moderators see who upvoted/downvoted a specific question?
27
What to do when I feel that someone is stalking me?
27
Can I see who I voted for?
3
What to do when someone deliberately down-votes many of the questions which I have asked?

46
Serial downvote reversal bot possibly missed some downvotes
24
Is it rude/abusive to include junk text to bypass the minimum texts requirements?
64
Can we incorporate what idownvotedbecau.se is trying to do?
12
Regarding the [down-votes] and [up-votes] tags - the line must *not* be drawn here!
97
Downvoting bot causing closed question deletion?