The information about who and when migration happened is thoroughly documented in the migration banner and linked revision history (Ben Voigt's answer provides a good demonstration of this).

View count and some other stats are not migrated; there are arguments to be made for migrating it, but there's also a huge amount of value in knowing how many people saw the question in its original location vs. its final destination as well. Migration is always a tradeoff in some fashion, and should be used sparingly for this reason.

My three guidelines for migration remain:

There's a third consideration when it comes to meta sites: bugs and feature-requests can legitimately be reported on multiple sites, but are often fixed once across all sites - thus, it can be advantageous to move them to one location prior to marking them fixed. Even on meta sites, migration should generally be used sparingly though; shuffling around reports that aren't currently being addressed is confusing to those asking them and busywork for those moving them.

I don't think it is critical in a general case that either the reason or the view count is preserved.

There stays a migration stub behind for while to hold that information.

I think it is fair to reset the view count when a post is migrated as it starts a new life on the correct site. As such the view count indicates how many views it has at its new home.

The reason for migration might not always be obvious but I wouldn't care much unless the post would be rejected on the target site because the migration was useless in the first place.

The post was migrated from MSE to MSO because a high-rep user started a close voted on it. The SE employee that added the tag also acknowledged the Close Vote by migrating the post. I don't understand that because the feedback link on Careers points to MSE, not to MSO.

Either the team is planning on moving the support to MSO (which I can understand given the upcoming integration) or forgot to update their support link on Careers. I personally wouldn't migrate bug-reports between meta sites but that is not my call.

I can't reproduce, the information on who and when is clearly visible from the link in the migration notice: 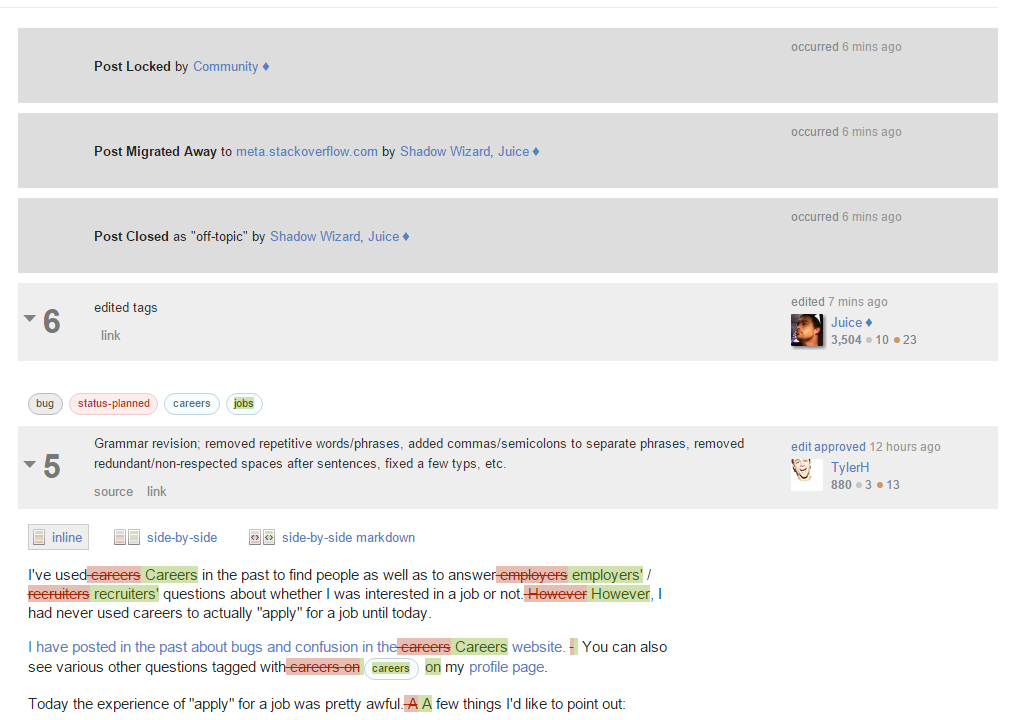 256
Careers Unificintegration: Jobs on Stack Overflow
43
Apply pop-up does not make it clear which version of resume will be attached
3
checkbox control with no action buttons on job messages

4
Migration too slow
3
Why was my flag asking a moderator to migrate my own question declined?
35
Guidance on migrating questions to Code Review
43
Considering changing the migration process