Is Stack Overflow really a community of 4.7 million programmers, just like me, helping each other?

Yes, according to the blurb of the front page: 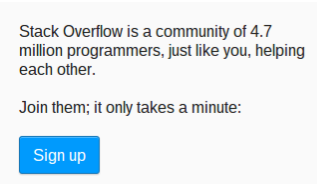 I understand there do exist 4.7 million accounts (the number grew to 4.9 million since the text was put in place). But over a million of those are zombie accounts, already eligible for automatic deletion on the basis of inactivity. In fact,

Also, to be in 2.5 million one only needs to ask some vague/obscure question that nobody else cares about; a question that will be deleted in 365 days as abandoned. This doesn't make one a helpful member of community, does it?

Also, this is over the lifetime of the site. The blurb says "helping", not "helped once in 2009".

Conclusion: The number 4.7 million, presented in the context of "helping community members", is quite misleading. I suggest replacing it with something more honest, such as the last of the numbers quoted above, or another realistic estimate of the size of the community.

Counting the number of user accounts is pretty worthless for a lot of purposes. You can't really estimate how many people are visiting that way; it's a crappy number to use if you want to figure out whether your VB6 question will get answered quickly, or if you should buy ad space for your new database de-crapifying tool. Our Marketing people hate that number too, because it's a lot smaller than the estimated number of unique readers, which means it's less impressive-looking in contexts where readers are what really matters.

But none of that matters in the context of that front-page banner.

The whole point of the little blurb is to encourage folks to sign up, to stop passively reading and create an account. Not to ask questions, or answer questions, or edit, or search... Because by the time you know you want to do one of those then you're either already doing it or (in the case of asking) looking at a much more authoritarian signup banner:

So the little blurb you're seeing is encouraging you to create an account before you need it. Even if you never actually do need it. Even if it becomes abandoned and eligible for automatic removal. And in that context, the only relevant number is the number of other accounts that exist*, because that's who you're joining. You're not joining the ranks of askers or answerers or editors or people who've read the help center... If you do decide to do any of those things, you'll get a badge and a different number to count yourself a part of. But at the moment you're seeing that banner, all you're being encouraged to do is take the first, tiny step.

*So, I'm a little bit annoyed that the number used here is the total number of accounts and not the total number of registered accounts. I don't really care enough to make an issue of it (especially since the numbers are so close on Stack Overflow due to the register-to-ask requirement), but if you wanted to complain about something this'd be the thing.

The word you are looking for is puffery.

The number of accounts with at least one post is 2.5 million.

That's true, but someone doesn't need to post in order to get help (or sometimes help - maybe by sending the link to someone else?). I know many people that have an account but doesn't participate at all in Stack Overflow.

The number of accounts with at least one positively scored post is 1.6 million.

One positively scored post doesn't necessarily help only one person, once in a year. The link can be viewed by many users, and they can find this specific post very helpful. I don't see any reason why to exclude these users from the statistics - For me, nothing is wrong about what the marketing says.

The number of accounts with at least one positively scored post in the last 90 days is 186 thousand.

Again. What's the problem with that? Not that I'm defending these users, bu take into account that the one positively scored post doesn't mean that the post is not helpful. I came across many posts that didn't have scores, by users that are inactive for long time, and still find it useful.

What I'm trying to say is that numbers can be always justified in a way or other, specially for marketing purposes. I can ignore hunder of thousands that can be filtered out for the sake of good marketing. There's really no big lie here, IMO.

If you read it like this, which I think you can, there is nothing false or deceptive about it:

Stack Overflow is a community of 4.7 million programmers, just like you. Our aim is to help each other.

I agree with Normal Human that the current wording is dishonest. I also agree with Shog9 that there is no definite way of counting that could be labeled the truth.

In situations where the exact truth is hard to pinpoint, but you nevertheless need to say something, I think it is important to not give a false sense of precision. Therefore I propose this wording, that still is impressive sounding and gives some kind of quantitative estimate, but does not paint a false picture of 4.7 million actual active users:

Stack Overflow is a community of millions of programmers, just like you, helping each other.

You are interpretting the sentence incorrectly.

If I say to you "look at all those people on the beach, helping each other learn to swim", it doesn't mean that every person is both a helper and a helpee. It means that there is a crowd of people in which some people are helping others, and by and large they are all benefiting.

The same with Stack Overflow.

Here we see another all to frequent event where a programmer tries to parse an English sentence too literally, and gets an epic fail as a result.

50
Number of new accounts that have their first question closed shortly after account creation?
25
New user herobox content blurb is way out of date

155
Badges for habitually asking well-received questions
115
Can we blow away some of the Tumbleweeds?
37
Implement a way to "deprecate" answers
38
Can we upgrade the Roomba to automatically delete poorly received answers?
38
Why is the rate of positively scoring questions and answers steadily declining?