Are answers that contain only commented code acceptable?

I found this answer today: 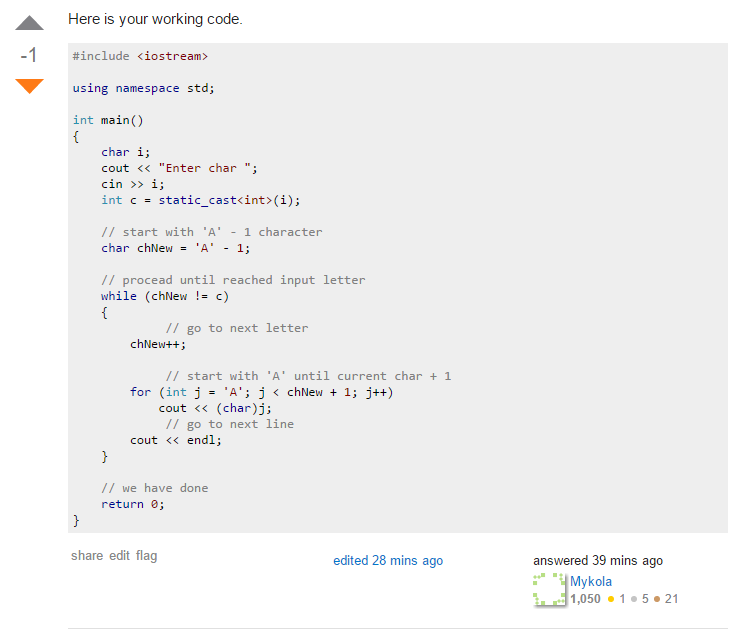 The code itself is fine, but there's nothing explaining the problem or why the provided code fixes the problem.

I commented on the answer requesting the user to add more details:

Please explain your code, instead of doing all the work for the OP.

The user then proceeded to argue that their comments within the code are sufficient. The comments sort-of describe the code, but it'd be useful if there was some sort of description (even one sentence) describing the code, such as the author of another answer on the same question did:

Use a nested loop structure. Use the outer loop to 'walk' down your triangle.

These kind of answers don't educate anyone, and may be hard to interpret for new programmers. Sure, I can interpret the code fine and can tell exactly what's going on inside it, but that doesn't mean a new programmer would be able to.

I read Is it wrong to ask for a description of how/why the code works in code-only answers?, in particular Makoto's answer:

While we can read and understand code, the better teaching tool (in my opinion) is to explain the rationale behind the code. If a person is unwilling to do so, then you could either leave a comment, downvote, or both. If they add an explanation, that's great - if they don't, then this leaves an opportunity for someone else to come along with a more complete answer.

Are code-only answers with comments acceptable? Was I incorrect to downvote the answer + request the OP to expand the answer?

I think your actions were just fine.

What you did do that was good:

What you didn't do that was also good:

I think these kinds of answers help people with their immediate issues, but they don't do much to aid in future understanding. We should be striving to encourage growth in the developer community, so that people can start solving their own problems, then eventually help contribute solutions to others' as well.

I believe your actions were helpful and correct in supporting this goal.

Good comments don't repeat the code or explain it. They clarify its intent. Comments should explain, at a higher level of abstraction than the code, what you're trying to do

I think this sentence alone (blatantly copied from Wikipedia, whose source is from Code Complete by Steve McConnell) proves that the comments in this specific answer are not good comments. They do not clarify the intent of the answer, at all.

As an example, consider the very first one:

Thus, this specific answer comes down a code-only answer and should be treated as such. Which is exactly what you did: downvote and comment the answer, inviting the answerer to expand, so I think your actions were correct and appropriate.

As to the more general question of handling code-only answer with comments, what I would do is the following: Are the comments good?

Are code-only answers with comments acceptable?

Was I incorrect to downvote the answer + request the OP to expand the answer?

I think you were correct. Context is important. Answering that question requires telling the OP what's wrong with their approach and why another approach would be better. You could do that in a comment, and if you did it could be a good answer, but it makes more sense as prefatory text outside the code. Then, comments in the code highlighting what's going on (probably in a way we wouldn't in "real" code) would accentuate and support that preface.

Personally speaking, I think you did fine.

You are of course free to use your votes however you want, but the main point is that you did attempt to address your concerns with the answer. They simply chose to ignore your concerns, which is unfortunate; the answer could be good, but just giving someone code to copy and paste into whatever they're doing isn't the best approach.

From my point of view, this code-only answer is(was) good.

there's nothing explaining the problem

Comments in the code actually describes algorithm, and ...

but there's nothing explaining ... why the provided code fixes the problem

... exactly algorithm was a problem for the asker. The asker knows (according to question post) that letter character is actually a number, which can be compared and be used in arithmetic operations such as addition.

Code in the answer uses nothing above asker's knowledge. Nested loops are just new things, but such things can be well expressed by the code itself.

here seems itself broad: What exactly is not cleared from the answer?

It could be (just example):

In any case, as noted by others, your downvote+comment correctly express your point of view.

Not the answer you're looking for? Browse other questions tagged discussion answers code-only-answers .

0
Providing Code Discription Answers
0
Should I downvote answers that contain no explanation?
78
Should "Professionals and enthusiasts" be qualified in the help center?
63
Is it wrong to ask for an explanation of how/why the code works in code-only answers?
17
Code-only answers
1
Should we comment our code when answering questions?
-21
Why to comment misprints or minor code errors?
-17
Why were my comments, related to the discussion, deleted while other participant's comments are left untouched?

112
When is it okay to edit answers for "Code Formatting?"
63
Is it wrong to ask for an explanation of how/why the code works in code-only answers?
15
Should I downvote answers that just state that the code in the question works?
331
Fixing answers that recommend "chmod 777"
8
Are trivial variations of code acceptable answers?
27
Dealing with answers that correct the code, but don't answer the question