We gave [bootstrap] the boot, but it wasn't heavy enough!

(This question/request is a follow-up to "Bootstrap tags revisited" - it is not a dupe!)

The terribly ambiguous bootstrap tag has caused a lot of headache, having been used for everything from twitter-bootstrap and statistics-bootstrap over android-bootstrap to bootstrapper and bootstrapping, of which only the last was legitimate use.

"Bootstrap tags revisited" has been posted early '14, and no action followed it for one and a half years, until I took it upon myself to just start with burnination, since the amount of upvotes on that question was pretty high - after two months and 3'000 edits from my side, the tag was finally gone, and I suggested to blacklist it.

That suggestion was questioned (which is a good thing):

I don't think burninate is the right term here because you would want to keep bootstrap on the questions that actually represent the term bootstrap which has nothing to do with the responsive framework.

But I've taken a screenshot of the newest bootstrap questions at a time when the tag existed.
Judge for yourselves.

It has been re-created at least four times so far, and always gathered at least 20 questions within 24 hours.
So I'd like to make the blacklist suggestion an official request.

bootstrap is a massively misunderstood and abused tag that keeps being re-created.
Can it be blacklisted, pretty please?

Attempting to use this tag will now produce an error: 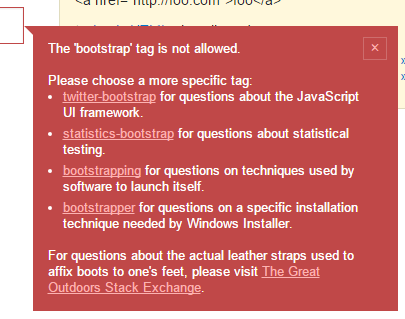 OP, I looked at the screenshot you provided and the majority looks like they're referring to the Bootstrap framework formerly known as Twitter Bootstrap. To blacklist the bootstrap tag wouldn't really solve anything, the next tag which would be abused would be bootstrap-framework which could still end up having questions related to some of the other tags which you stated in the OP (such as android-bootstrap and statistics-bootstrap).

I could understand blacklisting the bootstrap tag years ago when the framework was known as Twitter Bootstrap as the twitter-bootstrap tag could have been used instead then but since Bootstrap is the official name of the framework, I don't think it would be a good idea to blacklist it.

As each day passes more and more people are becoming aware of Bootstrap and probably in the near future you'll find new web developers might end up never knowing it was formerly known as Twitter Bootstrap.

When comparing bootstrap tag to other frameworks like Django or Ruby on Rails, those frameworks aren't known on Stack Overflow as django-framework or ruby-on-rails-framework. The most commonly known frameworks deserve their own tag with no suffix after it.

What I think is needed is 2 tags which are clearly distinct, and which will both show, so they can be compared, when a person starts to type "bootstrap"

87
Bootstrap tags revisited
54
What's with all the bootstrap-* tags?
35
Should [perl6] questions be tagged with the [perl] tag as well?
39
How to rekindle burnination requests that failed to ignite?
30
Do not show deprecated tags in tag autocomplete
4
Developer story tag migrated but not allowed
10
How can we distinguish data.table and datatable questions in R?
8
Deciding between [retag-request] and [synonym-request]
6
Request to change tag name for Bootstrap
5
"bootstrapping" tag description is not clear enough for new users
See more linked questions