Improving the quality of tag only edit approvals

I did a preliminary search on this, it's probably a dup, but I can't find it. Besides, it's just to open this idea for discussion.

I was talking to an OP in comments to clarify the question and noticed this suggested edit pop up, then noticed it was approved. 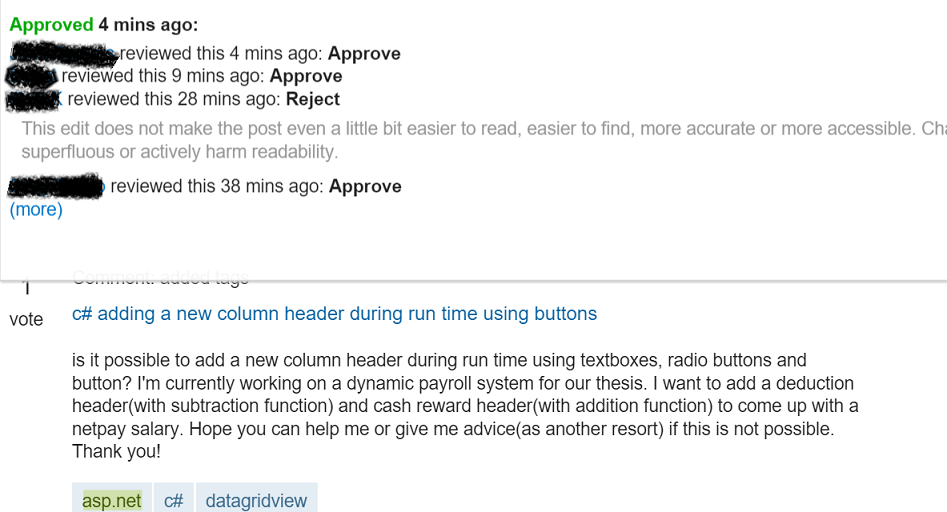 Beyond being clairvoyant I don't see how anyone could know if this is related to asp.net with this amount of information.

Now, it's not the end of the world. But I am always wondering how to improve things (usually my ideas are not on the most practical side, so please forgive me if this is a clanger).

So the discussion is:

Is there a way to help catch dodgy tag edits?
Should one of the editors have a badge in that tag for the edit to be approved? Would that kill the edit queue, cause an enormous back up. It might delay the approval long enough for the OP to come back on line and reject or approve it.

Does anybody have a better idea, or do we just leave it as is.

I've taken a screen shot to reduce the meta effect and to avoid link rot.

Let's assume for a moment that every editor is expected to add some value to the post. Once visible, the post should be better.

For fact, the suggested edit review queue is famous for its robo-reviewers. No matter what you throw at them, it will get approved.

I don't think restricting certain reviews to only eligible reviewers will prevent these kind of mishaps. And it does keep a possible valid re-tag into the queue longer, preventing the correct audience to see the question or for visitors to find it.

In the case you use as an example adding the tag asp.net brings in a vast majority of users that will quickly judge if the tag is correct and if not retag.

If there is something to be done, maybe it is in the tag added in relation to how it will change the visibility and its search rating. If a tag-only edit doesn't change the audience (in size or context) much then a notice could be shown to reviewers. But that is about it.

There is bot that runs in the SO Tavern that tries to catch suggested-edit-reviews that have an rejection vote. Based on the fact that all reviewers happily approve, an rejection probably means that review needs more attention.

Concluding: There is not much we can do without having a blowback on those who are genuinely trying to add value.

22
What does it mean when Community user approves an (incorrect) edit?
11
Is it appropriate to burninate tag while reviewing its wiki-edit?
43
Can we make approving suggested edits harder?
23
Questionable edits: Can I do something proactive instead of waiting for their robo-approval and rolling back?