What to do in this case of review? [duplicate]

This review looks like a something that should be a comment. But reading this is the last try, looks like the user who proposed the change is sure it is really better and should be updated. As I am not an expertise in these tags I don't know technically if it is correct. Should I just skip this revision, or reject as attempt to reply, or another thing? 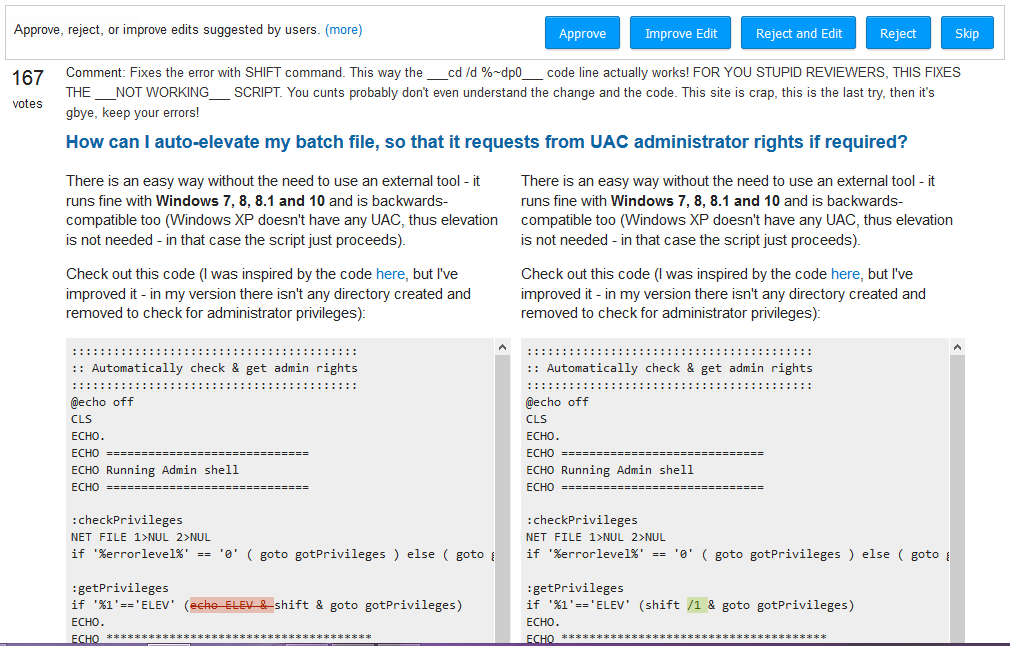 It looks like what happened here is that the OP recently edited their answer, and inadvertently added a bug. Another user (or guest) has discovered this and wants to fix it. That's good! How they're going about it is not so good though...

Suggesting the edit was appropriate (whether they had an account or not), because this is, simply, a suggestion to edit the code. The OP will get a notification, and can choose whether the suggestion is acceptable.

Since the OP will see that notification, I would say the correct action for reviewers is to Reject (which they did), as it changes the meaning of the answer, which is something only the OP should do.

So far so good. The OP will eventually see their notification and might change the answer (if the suggestion is indeed a fix).

Moving on to the user's bad behaviour:

The user certainly should not have submitted multiple edits and left nasty comments, and if they have an account they should not have suggested an edit anonymously. Their comment should have explained why their edit is an improvement. The comments they left on this suggestion are totally unacceptable, and their later "Fixed errors" comment (found by rene) is still not as clear as it ought to be (though at least it's civil).

It's worth getting a moderator's attention for the offensive comments. I don't know what tools mods have for contacting anonymous users but they may be able to link the user to an account if they have one. Other than that, Reject the edit and leave it to the OP to decide.

212
When should I make edits to code?

3
“Looks good” review reason not content related?
8
Should undiscussed burninates be approved? (fortify360 in this case)
14
Is this how reject and edit is supposed to work?
8
Is this edit suggestion a bad joke or offensive behaviour?
5
Edit review queue: Trivial backtick changes / capitalization
137
I'm banned from review. What should I have done instead?