Stealth revenge-downvoter: a downvote a day keeps the reversal-script away

The last few days I've been getting seemingly random downvotes on my questions, but I've worked out that it's likely the same user doing it.

Here is my reputation history for the last few days:

(The above image has been edited to remove irrelevant information)

I think it is the same user doing it because:

I've checked and there isn't anything wrong with the questions themselves, but however they are basic and the answers to them are simple.

I can't decide if this is enough to warrant a Stack Exchange employee to have a closer look into this, or if I should simply flag one of the downvoted questions explaining my suspicions. Of course, posting this question might help, but then again, it might not.

I read Who do I go to when I'm being stalked by a specific user?, but if I don't know/have proof that a specific user is doing it, or if I'm even being targeted, should I follow the same steps as a precaution?

We can only see larger patterns, though, and cannot see individual votes. Stack Exchange employees need to be called in to investigate and invalidate these votes, and their time is very limited. We tend to call them in only in the worst or most obvious cases.

I don't want to waste the valuable time of a Stack Exchange employee to investigate this if I can't be sure if I'm even being targeted.

Looks like it's still happening, and that the pattern has changed. Now in the morning & one of those was on a +14/-0 answer of mine which has nothing wrong. It seems that whoever's behind this is well-aware of this Meta post: 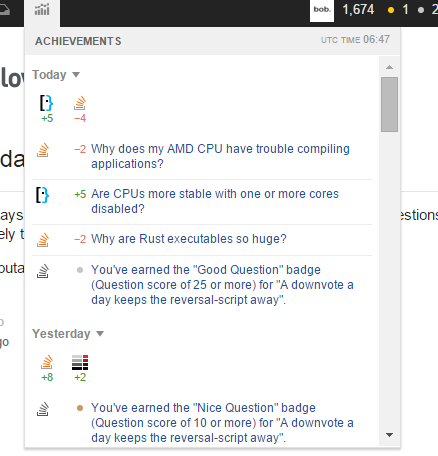 That's up to you. If it's not particularly bothering you, then you could just take satisfaction in the belief that someone is slowly wasting their life on this and go spend your own doing something more productive.

But if it's sticking in your craw, then flag a post & ask a moderator to have a look. They can probably determine whether or not this is really an issue fairly quickly, and will cheerfully tell you to go do something else if there's no reason to be concerned. If there's a real problem, they'll escalate.

As I have said before, this is essentially an unsolvable problem.

People are allowed to downvote you, the problem comes when downvotes are being targeted at a person rather than posts. So the obvious question is, where do we drawn the line? Let us use a binary search algorithm to decide:

Here is the problem with your complaint. Right now we have this post:

Someone is downvoting me every day, make them stop!

Now if we change the script to 2 days, we get this:

Someone is downvoting me every 2 days, make them stop!

ad infinitum. I think the current system is fine as is. Even if someone is downvoting you every day, it is a trifle. Even with your low rep, look at the numbers:

36
Is it a wrong thing to vote for close VLQ code-request with two images? Getting revenge downvotes
9
How is serial voting spread over a long period of time addressed?
6
Victim of Revenge Voting
1
Little itches that don't trigger the voting reversal script
164
2017 Moderator Election Q&A - Question Collection
252
What can I do about getting a sudden flood of revenge downvotes?
117
To whom do I go when I'm being stalked by a specific user?
46
Serial downvote reversal bot possibly missed some downvotes
19
How to deal with users who regularly put minimal effort into answers?
19
Action for Unreasonable Downvotes
See more linked questions

61
Second time that Stack Overflow's daily visits counter resets for "fanatic" badge
118
Is there a SO equivalent of the "witness protection program"?
1
Is this serial/targeted/cleanup downvoting or just a coincidence (again)? Or is this a misuse of a sockpuppet?
97
Downvoting bot causing closed question deletion?