Why does the comments score distribution show a logarithmic trend?

I was looking at this Stack Exchange Data Explorer (SEDE) query on the comments score distribution.

I've noticed that, for nearly all users I've checked, that the trend is (somewhat) logarithmic with the number of votes. Curious enough.

Is there any mathematical explanation behind this phenomenon?

To look at this more globally, consider the frequency distribution of all comment scores in the history of the site (SEDE query). In the plot below, comment scores are represented by points, proportion of comments with that score is on the y-axis, and the rank of that score's frequency is on the x-axis (score 0 is rank 1, score 1 is rank 2, and so on). Note that both the x and y axes are log transformed. 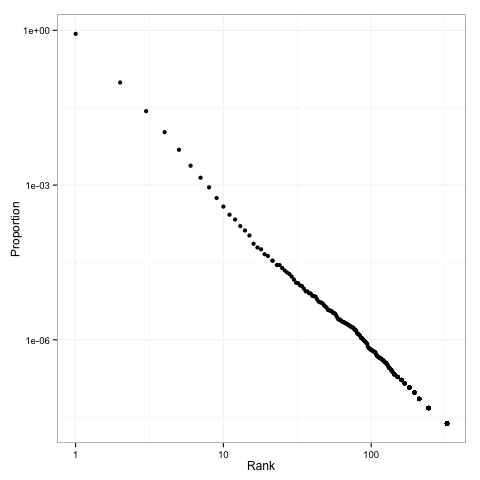 Visually there appears to be a linear relationship between the log of the proportion of comments with a given score and the log of the rank of the comment score's frequency; a linear regression model fit to this data would achieve R^2 value 0.998. This suggests that Zipf's law (a discrete form of the power law) might be appropriate to model the frequency of different comment scores, though note that more sophisticated tests are often used when testing for power laws. Power laws have the property of scale invariance; in this case doubling the rank of a comment score (roughly equivalent to doubling the comment score) leads to roughly an 86% reduction in the comment count regardless of the current score.

However, care needs to be taken to conclude that a distribution fits a power law; one important component of this would be putting forth a credible explanation for why the data might be expected to follow a power law. I think in this case preferential attachment (the concept that "the rich get richer," meaning highly upvoted comments are more likely to receive further upvotes) might be a reasonable explanation for why we might expect comment scores to follow a power law. Highly voted comments probably have particularly interesting material, which would increase the probability that they would be further upvoted by a visitor. Additionally, since Stack Overflow highlights highly voted comments by displaying them even when there are many other comments on a post and by changing their color to draw attention, the website itself also encourages further voting on highly upvoted comments.

88
Distribution of Reputation on Stack Overflow
4
Why is a question not considered well received unless it has a score > 0?
35
How can SEDE be utilized to find potential plagiarism on Stack Overflow?
88
Why is the quality of PHP questions, on Stack Overflow, in decline?
84
Why was I awarded the Generalist badge? Is it a bug?
36
What is the answers/questions reputation ratio?
38
Why is the rate of positively scoring questions and answers steadily declining?