When are "difference between" questions considered opinion-based, and when not?

Today I have failed an audit while completing Close Votes review.

The question has the following formulation:

R class and R.drawable class are two different classes within Android framework, both of them extends from Object class. What is the difference between the two? 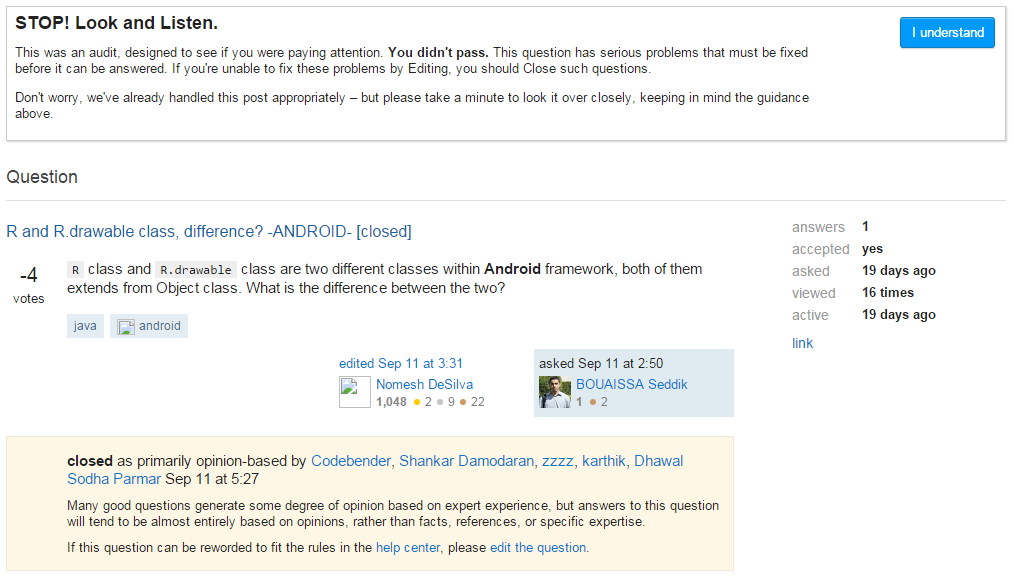 Of course, I can skip this question and keep reviewing. However, I want to understand why I am wrong in order to recognize such questions in future. In my opinion, this question is definitely not an opinion-based question because the original poster asks about the difference between two Java classes which is simple and unambigious.

There are many "difference between" questions at StackOverflow having a good rating:

If you ask "what is the difference between byte and sbyte", then you will get the plain answer - one is signed, another is unsigned. There will be no place for discussions, arguments, ambiguity or answers like "In my opinion...", "I would...".

So, am I wrong? If yes, then how to determine where is the primarily opinion-based question and where is not?

By the way, the answer to the audit question was definitely not an opinion-based:

Android.R is a set of built in constants provided by the android SDK. The R class represents the resources in the Android.R xml file.

The R.drawable class contains resources which can be drawn on to the screen. E.g. Bitmaps, NinePatchDrawble etc...

Note that the vast majority of "what's the difference" questions are Too Broad. Trying to explain everything about how to different things are different, without narrowing the scope in any way is typically going to encompass a huge amount of information. Making such a question in scope typically involves something like, "what's the difference between A and B with respect to context X?"

It's also worth noting that its very common for someone to ask an opinion based question, such as, "Should I use X or Y framework?" and then in response to it getting closed, they just edit it into the Too Broad question of, "What's the difference between X and Y Frameworks?" That progression didn't happen with respect to the one example you gave, but it does come up a lot, so any time you see a question that's pretty clearly very broad but closed as being opinion based, it's often because of that (or because people interpreted the, "What's the difference?" as more or less implying the question of, "which should I use?"

The question is considered opinion based when you are aware of multiple alternative approaches, but neither of which can be considered "the right one". Usually, questions with "should I use A or B" immediately fall into that category, but "A vs. B" very well could be opinion based too.

To actually decide, you need to know at least something about the area of the question. I.e. "string vs. String in C#" - without basic knowledge about C# you can't say whether this is strictly a language specification question (which it is) or a discussion about some libraries/types with these names that happened to be comparable, and picking one will end up with "tab vs. spaces" discussion.

There is the additional unfortunate case where opinion based/too broad are used as a generic replacement for "no effort whatsoever" as a reason to close, instead of simply downvoting (Which I feel is why the question was closed originally).

If I'd see one I would skip it because

Based on the current state of that question, I can't see why the two are related (most likely as I'm missing the context of what "Android resources" actually are).