Recently I posted a question and answer that was marked as a duplicate by five users who clearly must not have read any answers to it. The question itself is unique. Nobody had previously asked how to use the SF font specifically. And it has a unique answer as well, if you actually read it.

In trying to make my case in the comments, my comments were deleted. What this appears to be is moderators just "backing up" the initial users' judgements without evaluating the question themselves.

If you only read the question, it appears to be a another "how do I use @font-face" question, but in fact if you read the answer you can clearly see it's not; the answer involves something new called font-name abstraction (which in 10 years as a web developer I have never seen used before). Apple is proposing to add it to the W3C spec.

In the case of the SF font, it cannot be used (legally) with @font-face. The answer provides info about this technique that hasn't been covered on SO before:

I want to point this out because more care should be taken before closing questions, especially ones that could be useful to a lot of people. If a user votes to close a question, it's important to also read the answer to determine whether a problem is a new one.

First, when someone is reviewing close votes in the queue, all they see is the question, not the answers. This happens because we are looking to see if the question is a dupe. And your looks like every other "I can't make this font show up in my site" question.

Problem two is how you worded your question. You haven't done anything there to show that your problem isn't a duplicate of the other one. You can add something to your question like "I've tried the solutions here and here, but they didn't work". You should probably also mention that that font is special. If I saw that in the review queue, it looks like trying to use a Google font or something and thus looks like a dupe.

Consider how this is going to help future visitors. Will everyone be searching just for the San Francisco font? Will people know to look for that to figure out how to use all current or future Apple fonts? If you asked it something like this:

I am trying to use the Apple font San Francisco in my project. I've done X, Y and Z but the font still doesn't show up. There is no URL I can use in CSS to import the font with. This is also limited to / new in iOS 9.

If a mod votes to close a question, it's important to also read the answer to determine if a problem is a new one.

No, it shouldn't be. If the questions are duplicates, then the new answer should be posted on the original question. If it is a different question, then that needs to be made clear in the question body, not in an answer.

In this specific case, I think the opening part of your answer:

along with the text you quoted, belongs in the question.

None of the five people who voted to close that question were moderators, therefore they did not have the power to delete comments. Regarding those comments, this is how they went: 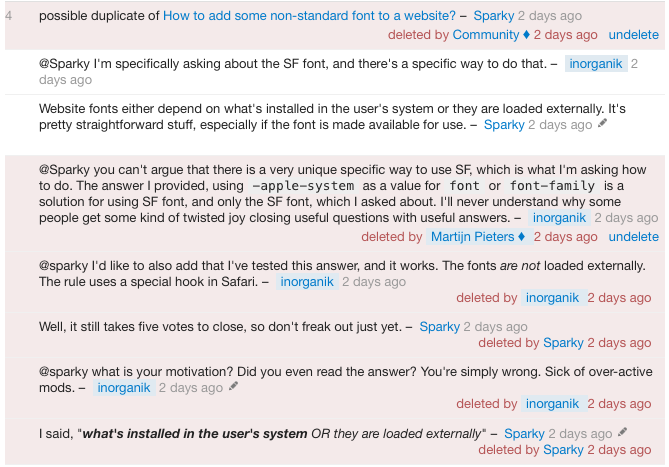 The only comment not deleted by the author (or by the system on question closure) was one that was deleted by an unrelated moderator. Your comment had been flagged as being "not constructive", perhaps because of "I'll never understand why some people get some kind of twisted joy closing useful questions with useful answers." It was deleted for that reason.

It looks like you're catching a lot of grief due to the tone of the question, so I'll try to be a little more diplomatic.

For most people on the main site a question that more or less reads:

How do I use font X on my site?

Very much looks like a duplicate of the loads of other similar @font-face questions. Most users won't take the time to look into the specific font because, for the vast majority of fonts, the specific font doesn't really matter.

To get the question reopened you may want to edit in the fact that you're aware of the @font-face method and the related questions and that it doesn't work for this specific case.

33
What can I do if I believe that my question was wrongly marked as a duplicate?

24
Give more attention to user-identified duplicates
56
How to reduce and quickly close questions that are merely requirements?
15
"Ask Question" similar questions workflow
1
Some more old questions which are have no value
3
Lets improve the model questions that are shown to new users before doing a dramatic redesign of other parts of the UI
19
How to improve my mentioned question?
87
A third party site stole my SO post and is pretending I'm a contributing author to their site