Is there a flag review problem, or is it just me?

Let's have look at my flag history: 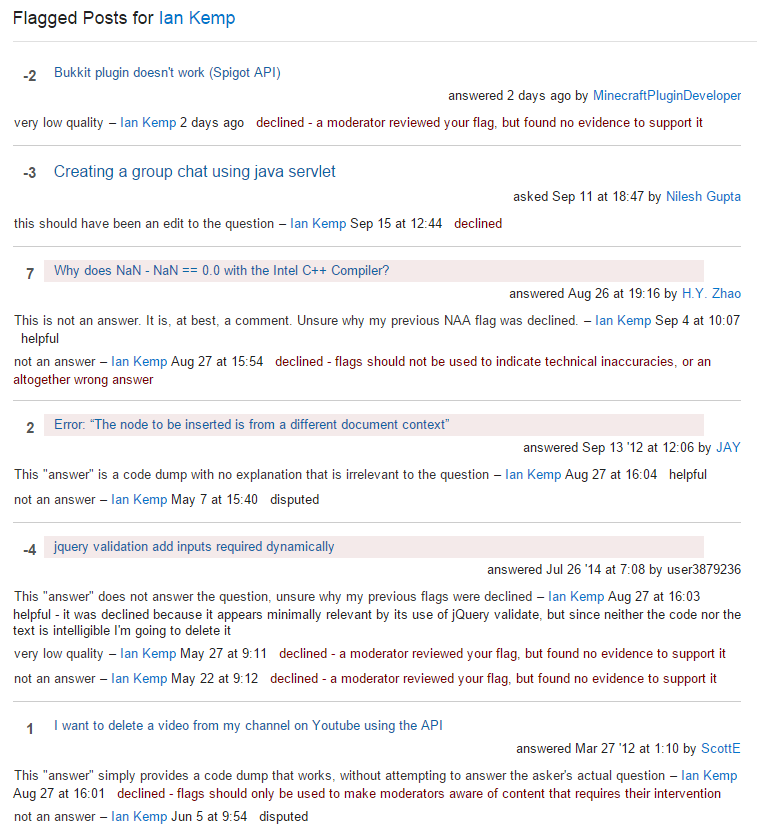 The last 6 flags I've raised have been declined. The 3rd through 5th I had to resort to moderator flags to actually get obvious crap to be fixed/removed. It seems I'm going to have to do the same thing with my latest 2 flags, as well as maybe the 6th (which has already been declined by a moderator).

Now, this isn't a deterrent for me - I will continue to flag junk until it gets fixed - but surely there are others who will become discouraged when their valid flags are repeatedly declined by robo-reviewers and mods. And of course, having to re-flag things wastes my time; having to escalate to mods when the review queues should handle it, wastes their time.

My main concern is that flags are apparently increasingly being judged by their content, not their context. Is this something that anyone else has experienced, or am I just being a grumpy old man (again)?

Flags have, for the most part, always been judged by their content largely absent of context. It's unfortunate, but with the extremely high volume of flags being processed each day it's simply too time-consuming to be evaluating every flag by context.

This is why we advise using the stock flags, NAA and VLQ, only for egregious cases that don't require any sort of context. Where just one look at the answer anywhere and we know it's so bad it needs to just go away.

And, trust us, we really don't mind custom flags for non-obvious cases. Because we hate robo-reviewers as much as you do. For example, you're in a much better position than the mods to evaluate whether a code dump is at all relevant to the question at hand. All you have to do is tell us.

While I'm here, I'll just post my thoughts on each of the posts you've listed:

374
When to flag an answer as "not an answer"
188
Stack Overflow is not yet a vast wasteland: a history of moderator tooling