This question (NOT MINE) was (and still is) unanswered, so I placed a bounty on it.

When the bounty was very near to its expiration, somebody published a random garbage answer which not only does not answer, but doesn't even remotely address the question.

It's pretty clear that he did that in order to get 25 reputation points for nothing. That's what I call a "bounty troll".

I don't care about the reputation that I wasted, nor do I care about him getting reputation for a garbage answer. It does bother me that the bounty mechanism, which is supposed to be a tool for improving the quality of SO as a source of information, is so easily perverted to obtain the exact opposite effect: what previously was a valuable, unfortunately unanswered question which deserved more attention, now is an unanswered question with a garbage answer which, by the way, is wrongly implicitly signaled as the accepted answer. This is worse than no answer, because

To me it's obvious what SO should do to prevent these situations which degrade the quality of SO:

If you do not award [...] the highest voted answer [...] with a minimum score of 2 will be awarded half the bounty amount.

The current score threshold of 2 is ridiculously low. My question is the proof that even a garbage answer that cites some random piece of documentation remotely related to the subject of the answer can achieve a score of 2.

Leave the empty checksign that non-accepted answers usually have. An answer that has been automatically awarded a bounty is not an accepted answer

Unless you may want to just remove the auto-awarding mechanism altogether, which is very questionable in the first place.

Disclaimer: I have not used the bounty system personally.

The question is not very clear. I'm no expert on those tags, but I had a hard time figuring out what was actually asked. Merely editing the question to make it more understandable, or at least make the core question more obvious might have gotten the post the extra attention it needed without a bounty. Because of how the question was worded, many users probably found that answer useful enough and upvote worthy. And the answer seems like an honest attempt to answer the question, whatever it is.

It's pretty clear that he did that in order to get 25 reputation points for nothing.

No the user took the time to post an answer, and 3 other users thought that answer was helpful. I am a bit surprised to see those upvotes on a post with lackluster formatting and a rather sparse explanation. However, it is by no means "trolling" or a "random garbage answer."1

I think your case is a weird situation that just played out in way you didn't like. The answer might have been bad, but I feel this was more a failure of SO's usually on-point moderation. With just one more downvote, the answer would have a score of 1 and wouldn't qualify for the automatic bounty award. Or as Pekka investigated, it was plagiarism and could have been custom flagged with the details. At the very least, the deletion of the answer rectifies this situation.

1 As of now the answer is deleted, and you're right (and I was wrong) that it is dishonest answer. But you could have been a bit more eloquent in describing it than "garbage answer that cites some random piece of documentation." You could have, for example, included the random documentation being "cited" (or in this case plagiarized). Or even left that comment on the answer itself to help warn others.

Your request in general

2 is a ridiculously low score threshold

I disagree. In low traffic tags, people are lucky to even get a single upvote. I'm guess the threshold is intentionally low to allow traffic tags to actually benefit from the bounty system.

Don't mark the awarded answer as accepted Leave the empty checksign that non-accepted answers usually have. An answer that has been automatically awarded a bounty is not an accepted answer

I have no idea what you are talking about. This is the current behavior, and your question has no accepted answer. This is what I currently see, and there is no check marking the answer as accepted. There is only a notice that the answer previously got a bounty. 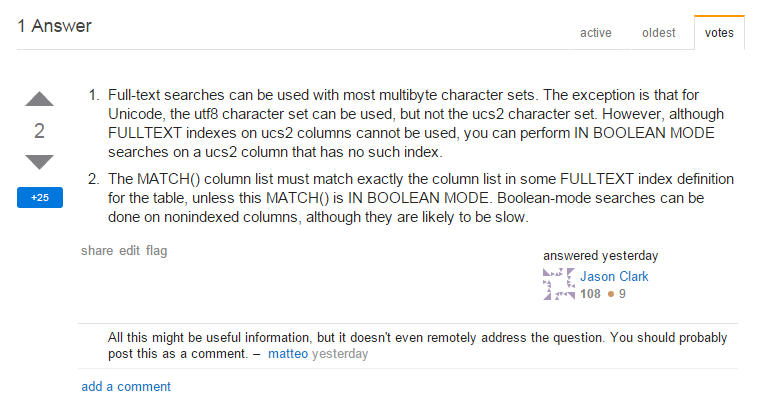 53
User doesn't give an answer but gets a bounty reward

3
Is it possible to receive multiple bounties for same question?
8
Bad wording in the rules for auto-awarding bounties