Observation from Site Analytics: fewer questions are being asked

I've had a look on the Site Analytics page. I displayed the full historical range, questions only, weekly. There is a pronounced yearly oscillation, spring being the most active season (and we can clearly observe why the Christmas hats were introduced).

My interest is elsewhere, however: the long-term trend. Here is the screenshot as described above, annotated by me with a trendline:

A prominent feature comes out: steady growth just up to about mid-2014, then a marked slump. If we take care to compare the same week in different years (to eliminate the effect of the yearly oscillation), we can see that for the months of March and April (normally the busiest ones) there was an actual drop in question volume.

What would be a good explanation of this? On the bottom graph I looked at Visits for the same setup as above. It doesn't show the same slump, rather a steady decline in growth rate.

On the whole, I'd say that post growth rate is not so concerning if:

In fact, given the difficulties we've seen with floods of extremely poor questions, a bit of a break in growth might be welcome. I suspect that nearly every working programmer in the English-speaking world has visited Stack Overflow, so it's entirely possible we will hit a steady growth rate approximating the difference between new programmers entering the field and developers (such as myself) who move on to something else. Software continues to be a growth industry. It's just not growing as fast as Stack Overflow did in the first 5 year.

It's possible there's a natural limit to the number of questions that can be asked about a particular technology and we might be approaching that limit—especially on popular tags. If so, it will be difficult or impossible to ask new and unique questions. This is doubly true for people entering the discipline since everyone has the same sorts of problems when they first start with a language. Programmers who are able to ask new questions in Java, C# or PHP have gotten themselves into obscure corners and probably have more-than-typical experience. So post rate might even grow slower than programmer growth rate. (This is one of the reasons we are looking hard at other content types such as documentation.)

So let's go back to the two things that might be a concern. 2014 marked a turning point in answer rate:

The blue line is questions (including deleted ones) and the green line is answers. At the start of the year, the spread was around 25k more answers a week than questions. By the end of the year, with roughly the same number of questions, the spread had shrunk to ~10k. That's about the same rate we've seen so far this year. (For reasons unknown to me, there was a large spike in activity leading up to the week of April 19, 2015. Temporarily, the answer rate was restored to something like it's pre-2014 rate.)

As a quick aside, we delete unanswered and zero-scored questions after a year. While this removes mostly unanswerable junk, it does make our public stats (which ignore deleted posts) look better than reality. Looking at 0 score questions by week last year and excluding deleted posts, the "Uber-Tumbleweed" event horizon (one year ago) is pretty clear: 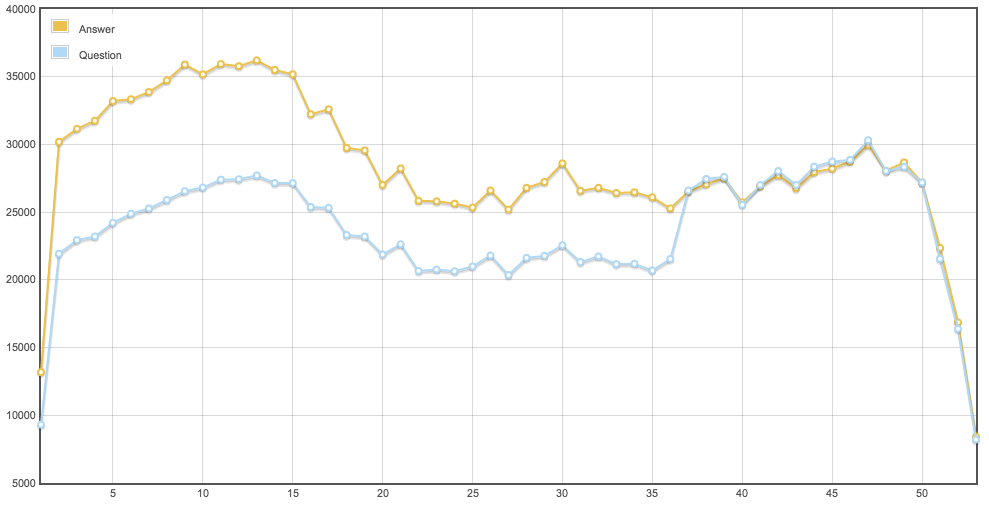 We can safely assume there aren't many hidden gems in this group. But if you crank the question score up to something more reasonable, like 2, the gap between answers and questions still shrunk in 2014. As a result, I'm concerned questions aren't getting the answers they deserve or at least not as many as in the past.

I'm also concerned that good programmers are discouraged from participating. We have some anecdotal evidence that experienced programmers who don't currently participate on Stack Overflow are intimidated by the process of getting started. This is one of the reasons I'm looking into a mentoring system. Talking to programmers who aren't active on the site we hear that it's really hard to ask questions that haven't already been asked and that the most commonly-encountered programming questions have already been well answered. So the old adage "write what you know" is generally poor advice on Stack Overflow.

There's a bit of a Catch 22: questions in less-frequented tags don't get as many good answers. I divided all first questions so far in 2015 (to avoid the automatic deletion mentioned above) into 4 more-or-less even bins by their primary tag's duplication rate:

In either case, the difficulty is getting sufficient reputation to fully contribute to the site. It's probably a natural (not artificial) outcome of how the site works. But that doesn't mean we should give up on helping potentially valuable new contributors get started.

This question is of course entirely reasonable and interesting. However, I would like to start a digression about the phrasing of the title. "Is StackOverflow declining?" (emphasis mine) hints at an unspoken assumption that boundless growth is a need in and of itself; that a slowdown of growth is a problem, a sign of decline and that something must be done about it. But is that really the case? Wouldn't a decline actually consist of the loss of our ability to produce quality content that is useful to virtually all programmers?

I don't mean to suggest growth isn't important; that would be naive. However, naturalising the importance of growth leads to bad decisions, especially when there is a community involved. Questions like the one in the title make me anxious because they remind me of another community I love: Wikipedia, whose backers (i.e. the Wikimedia nonprofit, itself very worthy of respect) are lost at sea, sinking enormous amounts of effort and community goodwill in futile measures to address a supposed issue of growth.

The conjecture originally presented in this answer is now disproved thanks to Jon Ericson. Here is the time evolution of the volume of non-closed, non-negative score questions and answers to them: 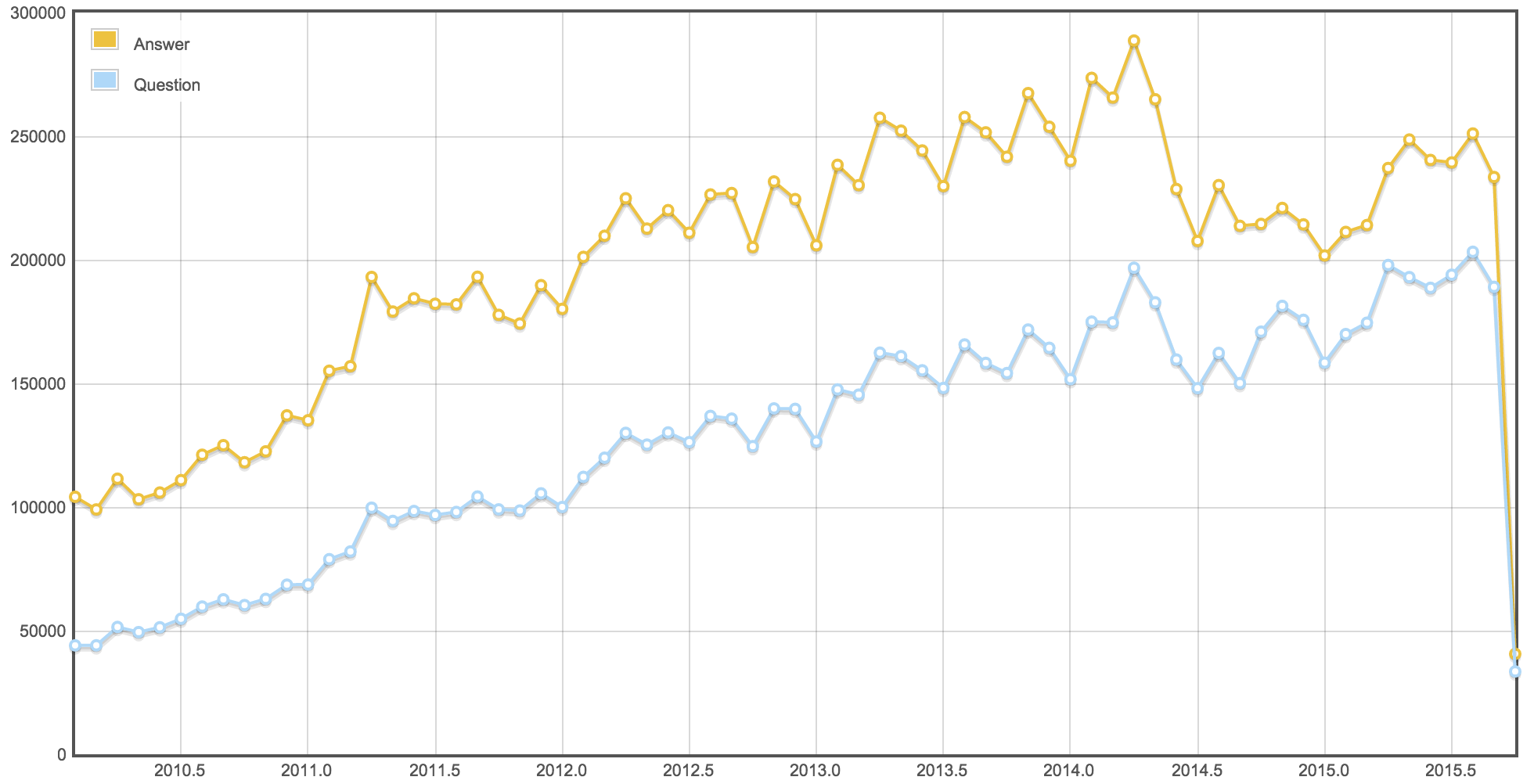 I have got a conjecture based on the peculiar behavior of the (answers minus questions) value over time—that is, of the surplus of answers over questions, regardless of the question volume itself. This is the time-series chart of the difference in the weekly volume of answers and questions:

Where the total volume of questions was increasing all the time, the A-Q difference was suprisingly steady. At the key event in 2014 the difference dropped, but then again maintained the new value, then slighly jumped up very recently. Still, the whole series can be very well approximated with horizontal lines (constants). I think this effect asks for an explanation, and here is my attempt.

Not all questions are alike. There is a specific category of questions which receives an inordinate amount of answers: beginner's questions, often re-asked tens and hundreds of times. Entry-level respondents pounce on those questions because the answer is known to many. Regardless of other types of questions, there may have been a constant number of these and a constant number of answers to them; these answers account for a large proportion of the surplus. If the above is true, then measures which reduced the number of such questions being posted, and also measures which reduced the number of answers to those questions, would both contribute to the reduction of the A-Q surplus.

This paragraph referred to previous header ("...is SO declining?")

In order to answer your question by yes, we would have to state, that quantity defines quality. Because in order to say that SO is declining, it would have to mean that the less questions mean less quality (maybe it was simply a poor choice of words or wrong understanding from my side - in that case, disregard this paragraph). Grenerally speaking, the community is striving to have the best questions and answers for them so everybody can find what he/she is looking for and more doesn't necessarily mean better.

The rest is still valid

It's fairly normal that people get bored of something and switch to something newer, fresher and better (from MySpace to Facebook for example). But there is nothing neither newer, nor fresher let alone better than StackOverflow. Otherwise we would all see that "new thing" right?

Or maybe take it this way - maybe human curiosity surpassed the speed of technology evolution - then we're seeing a cool phenomenon here - that currently we are as fast in asking about techno as new techno is coming out.

Or maybe people have finally figured out, how to use search...

For the record, the graph shows that regarding the number of Qs asked on SO, that number has "gone flat", ie growth has stopped. The OP asks:

Answer: it is absolutely impossible to truly know that. This is precisely in the category of question of "why did the Dow Jones drop last week?" or "Why has Walmart grown and Sears has shrunk?" or "Why did Apple lose half their market share to Samsung?" or "Why has the oil price dropped recently?" It is

to "really" answer such questions.

There is an absolutely critical observation to be made here.

It is this dead simple:

• every single (no exceptions) dotcom, which has existed so far, has had a phase of growth of metrics (such as "posts made" or "reviews posted" or "users joined"), and then, that growth phase has ended at some particular point in time.

Note that this is so absolutely and utterly normal ("every time so far") a part of the dotcom business, that, it's an utterly normal thing one talks about in relation to dotcoms. When will the growth phase end, do you guess we're at the end of the growth phase here, what do you think is better, the pre- or post- sellout, and so on.

Indeed it would be astoundingly and wholly remarkable if, SE was the known universe's first dotcom, where, the growth phase has not ended. SO's "run" before the growth phase ended (what was it - 6 years? the wholly useless charts above do not have years indicated on the X axis) is utterly typical and unsurprising.

The only "answer" to your question here, is, that the question is somewhat misguided. All you are saying is "Oh, look at that, as it turned out SO's growth phase lasted X months (80 .. whatever) and it ended in spring of 2014 (whatever)"

Then regarding that observation, you're saying ....... what?

You could comment on it in different ways like "that seems typical" or "Huh - imagine!" or "Man they are taking a risk going for a sellout after rather than before the growth-end" or "what a nice run it was" ... or whatever.

And - by all means - with these "metrics" you can and should certainly look at others: so, things like "ah hah! but if we look at comments made, it's still solidly in the growth phase!" ... or whatever. Do that.

Finally, as mentioned: SE, like Google, is an advertising business. If you're thinking of it more "as a business", then, trivially and obviously, one would look at ad revenues, and see whether that is still in the growth phase; that's more of the "real" metric. (The "other" metrics are just what analysts use to guess what will happen to the actual measure (ie, money) of the business.)

Not the answer you're looking for? Browse other questions tagged discussion site-analytics .

2928
Warlords of Documentation: A Proposed Expansion of Stack Overflow
1223
Why is Stack Overflow so negative of late?
307
On large communities decaying over time, being nice or mean, and Stack Overflow
119
Remove the incentive for FGITW to answer well known dupes
91
Sudden change in voting proportion
5
Efficiency ratio
16
How should we handle the current void of content at Meta Stack Overflow?