Am I right that this:

pretty much is an instance of this: 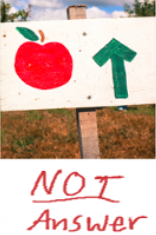 and can therefore be legitimately be flagged as "not an answer"?

Without any context I would say you're correct in your assessment that the answer is an example of not an answer as explained in the epic post from Shog9 with the title Your answer is in another castle: when is an answer not an answer?

The answer uses a clever disguise (intentional or not) by using more words instead of the dead-obvious look here. If you leave out the links the answer doesn't add anything new already known from the question.

There are a couple of problems however on how to handle this. First of all the answer is accepted by the OP and was not the first choice. The timeline shows three different accept events where the current highest voted answer was accepted before. Based on that you could assume the current accepted answer helped the OP most.

Glancing over the content in the links I see bits that are also in the other answer so I'm not comfortable editing the useful content from the links into the answer so it can stand on its own. So salvaging that answer in this way is only possible by the answerer.

As that answer got over 200 up votes, down voting it doesn't make much difference, especially because the whole question and all its answers are community wiki. No reputation will be harmed in that process.

You could leave a comment for the answerer to suggest editing in the relevant parts of the linked content.

Flagging the post as not an answer will send it to the queues but due to the fact that the answer is accepted it will also end-up in the moderator queue. It then depends on the subject matter expertise of the moderator if you're flag is handled as helpful. If you look at the first comment of @Cerberus on this question you'll realize that a moderator can decide in a similar fashion, causing the flag to be declined.

One option is to use the other flag but that needs a very solid explanation because you need to convince a moderator to remove an accepted answer that in a sense is helpful and has high view rates. Maybe convert it to a comment.

The best option for the specific answer would be:

I've declined NAA answer flags on the post on the basis that the whole post, including the answers, is CW. That means the community can fix this without moderator intervention.

Besides, the post has been found helpful by a lot of people, and moderators are always cautious with just removing such content outright.

Just edit the posts, the threshold for editing is lowered for a reason.

28
Can we please clear misunderstanding that deleting old highly upvoted posts causes reputation loss?
19
Should we consider an answer which mainly contains great links as a valid answer?
3
When is further explanation / a custom flag required for not-an-answer?

26
How should I treat a well-written question that is a duplicate?
30
Declined flag on link-only answer only because of the number of votes
130
How to cope with complaints from tutors who want to fight cheaters
27
Link Only Answer - Not An Answer Declined
16
Almost link-only flag declined
9
Link-only answer, flagged, deleted, then undeleted
6
Helpful flag for link-only answer does not lead to answer deletion