So I was posting a question today that was obviously enough about SQL.

At the bottom I saw the little "Suggested Tags" widget trying to be helpful, recommending Sql-Server and MySQL.

And then it hit me. That's why so many new users tag their SQL questions with both Sql-Server and MySQL, which I assure you, causes no small measure of frustration among those of us who are experts in one of the two, but not both. Count how many comments have something like "Which is it? SQL Server or MySQL? It can't be both" if you're feeling ambitious/bored.

Can we please stop this? Maybe just suggest the SQL tag?

I've already seen this question, and the duplicate it points to. I understand the reason why we offer both of these tags, trying to get the poster to focus their question to their specific RDBMS, but it's back-firing and causing them to use a shotgun instead of a laser. Nice idea, but it didn't work, IMO. Time to put it to pasture, please?

NB: The "Suggested tags" appear to be sent back from the Server in the response to https://stackoverflow.com/posts/0/editor-heartbeat/ask (along with other functionality such as draft saving and returning the list of "Questions that may already have your answer")

An example screenshot (of an entirely fictitious question) is below 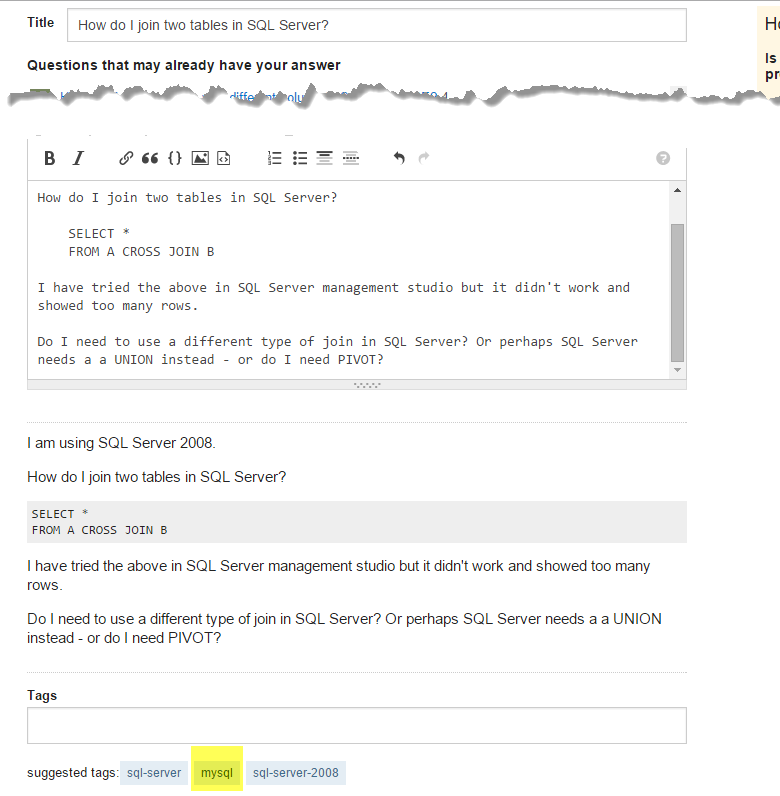 Just so we are all on the same page, here's what happens when you type "sql" into the tag text box:

That's pretty messy. If I were to attempt to make it clearer what's going on, I'd probably remove the helpful popup and not the list of suggested tags. Most of the advice in the warning is unrelated to which tag to pick.

Or are asking about doing something on two different servers:

Finally, as bluefeet notes much of the problem stems from terribly generic naming of these products.

Not the answer you're looking for? Browse other questions tagged feature-request suggested-tags .

8
How do we clean up inconsistent tagging?
289
Help the helpless with how-to-ask tag tips
121
How can we stop SO suggesting both C and C++ tags on questions?
23
Rename [sql-server] tag to [ms-sql-server]
32
Can we get a warning when a user tags multiple DBMSs?
24
Should SO force tagging the database engine for SQL questions?
4
Can we remove the [mysql-server] tag synonym
4
Adding an 'You tagged this as SQL maybe you should also tag as specific DBMS' hint when posting questions
-7
Is there a way to force users to choose their Bootstrap version for a question?

22
Disallow the tagging of questions with both C and C++ tags
81
Allow for Tag Antonyms
118
Stop generic database questions from getting [mysql] as a suggested tag
4
Why were my suggested tags just git and python?