Often I've found that the best answer to a question is not the accepted answer. While Community Wiki offers a way to let the crowd decide, I think SO would benefit from the feature I've described below.

I propose that we add a peer-level answer to the right of the requester's approved answer. See the screenshot below.

This would allow us to know if a significant fraction of SO users found a community answer better in some way than the "official" answer.

Why is this a problem?

Marking an answer as accepted does not make it any more correct or valued by the community. It simply means that the OP selected the answer as the one they personally found the most helpful.

Suggesting a rather major site redesign to solve a problem most users don't have, seems like making mountains out of molehills...

This is a good idea, it has a real problem but I'm unconvinced by the solution

First, best is pretty subjective. Do you mean best in your opinion, or best in the communities opinion? The first is dictated by whether you have up voted or not, and the second by the score.

It is well-accepted that people are bad at gauging their own level of expertise.

The crowd can often find the most-appropriate answer.

Perhaps, and yes they do.

The answer to a question can change over time.

I propose that we add a peer-level answer to the right of the accepted answer.

First things first, why does it need a new mark - don't the votes already cover this? If it is more up voted than the accepted answer then it's better?

And next to - maybe not. The main thread pane is 600px wide, plus some white space and a 220 sidebar. This makes it close to 1050px wide in total. Adding another answer to the side (without the sidebar) makes it 1460px wide. Bear in mind that 1280 x 800 is still a commonish screen size, making it that much wider does affect the content a lot: 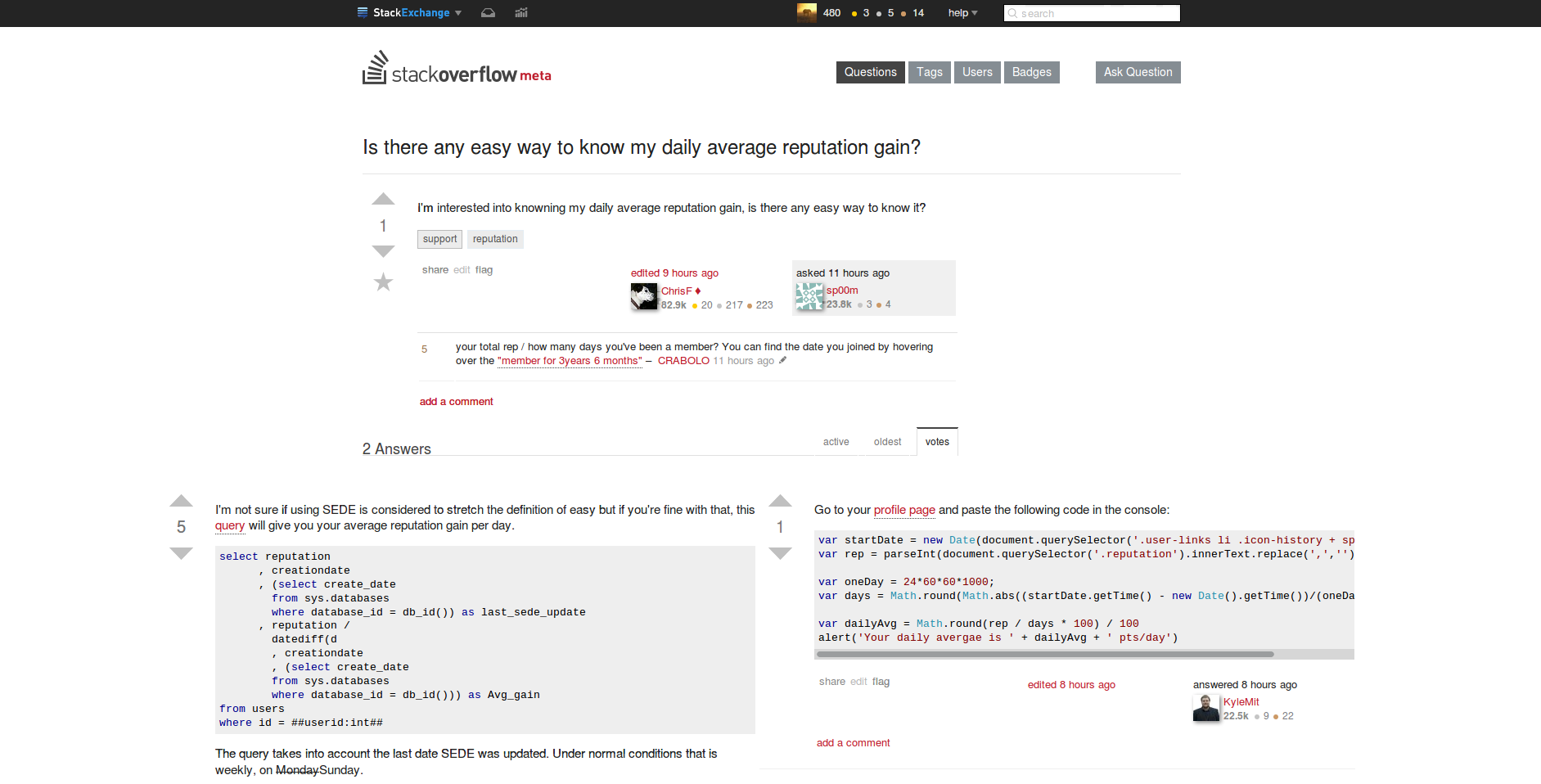 Instead, I have a different solution. It doesn't have a new "checkmark" or similar, it just changes the exiting behaviour.

Rather than forcing answers to the top, an accept has the same effect as +3 and then +10% of the absolute value. This adapted score isn't shown, but it is used in sorting.

The +3 means that any post with an accepted answer at 0 and another at 1 still keeps the accepted one on top. Instead of the 0 score, it would be sorted as if it had 3.3 - i.e. above the answer with 1.

The question is good, so I gave an upvote. But I don't agree adding a "community accepted answer". Rather, the site should move more upvoted non-accepted answers right after the accepted answer but it can do some visual effects like tinting the background color.

E.g. Look at this: Remove Duplicates from JavaScript Array

Sometimes, you might not even notice the 500 upvoted answer if you don't scroll down.