I've recently been using the review consensus script to see whether my Stack Overflow reviews agree with those of other reviewers, and I noticed that I'm generally matching consensus except for in the Low Quality Posts queue, where my votes have often differed from others recently. Unfortunately I'm not able to view any of the posts that were deleted, so below are a few of the posts where my review was opposite of the other reviewers but where the posts haven't been deleted yet (so we can still see/talk about them), and my reasoning behind my votes.

Note that I don't make any attempt to determine if the solution is correct or helpful or necessarily even relevant to the question as part of this process [...] 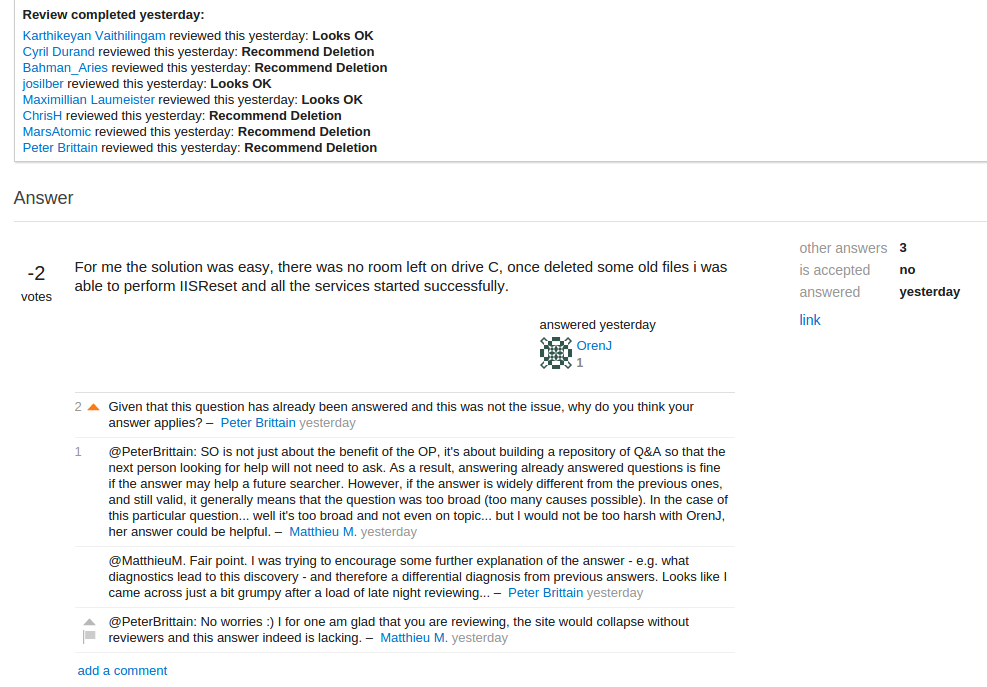 Does the post attempt to answer the question? Yes goto step 2.

Would it be possible for a reasonably-intelligent English-speaking person familiar with the topic to understand the solution being presented? Yes (the solution is understandable, though it could use some minor grammar edits for polish) Looks OK. 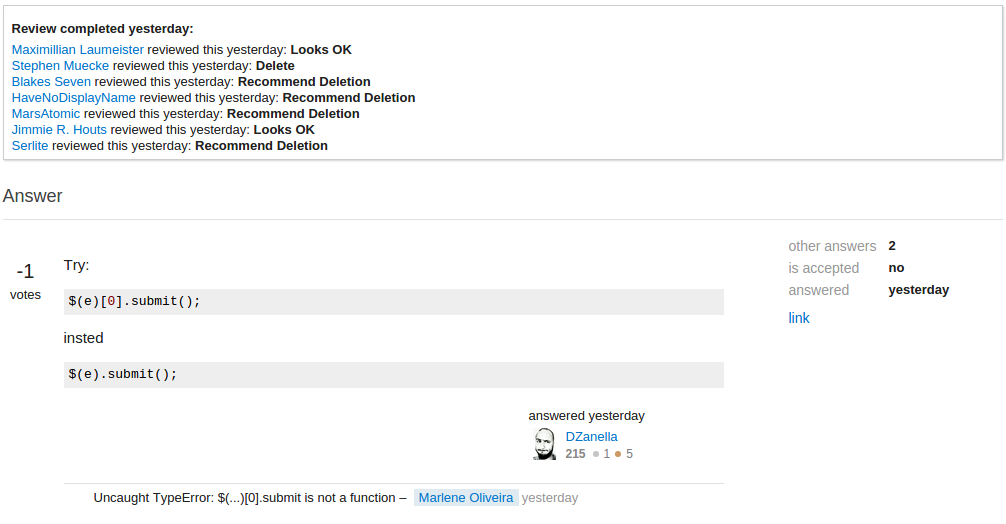 Does the post attempt to answer the question? Yes (this post obviously provides an answer, whether it's right or wrong), goto step 2.

Would it be possible for a reasonably-intelligent English-speaking person familiar with the topic to understand the solution being presented? Yes (it's pretty obvious for an English speaker that he meant "instead of" rather than "insted", though the post needs an edit) Looks OK.

This post needs a spelling/grammar edit, and is lacking in explanation, but it definitely provides a solution to the problem (whether correct or incorrect), so I am having trouble understanding which part of the review guidelines suggest that it should be marked for deletion instead of just downvoted as being an incorrect solution. 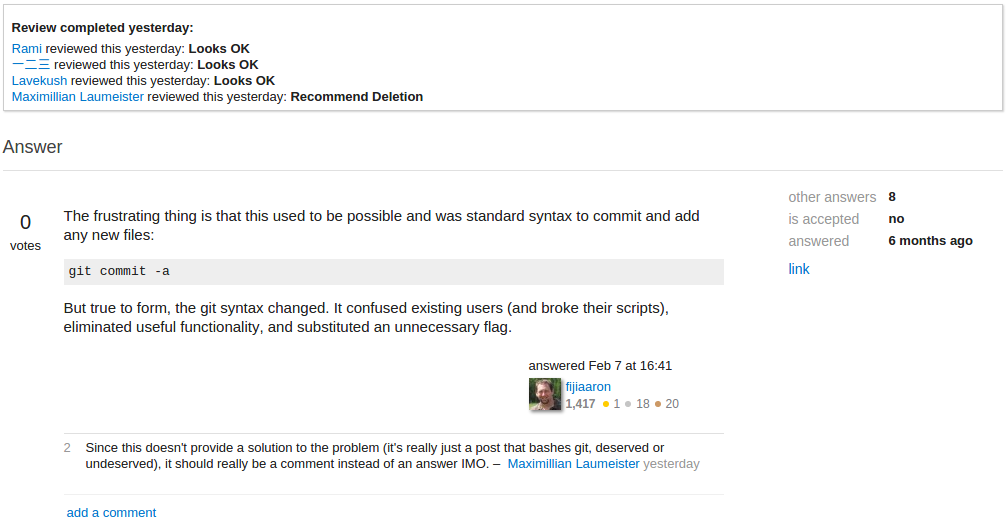 Does the post attempt to answer the question? No Delete

This seems like a very clear cut case of not-an-answer to me. It does not attempt to provide a solution to the problem, and it does not even attempt to give any advice to the poster. The answer is literally just a short rant about how Git is frustrating.

In any case, I was just given a review ban for failing a review audit in the LQ queue. The failed audit is at this link, unfortunately the answer has been deleted so I can't be sure of what I did wrong. (I have a hunch that it might have been a legitimate-looking answer with spam links hidden in it, in which case maybe the ban was warranted and I should be more careful next time.)

Here are some more reviews where my vote was against consensus. Some 10K rep user who can see the deleted posts will probably come along and say that I was way off base with my votes on these, but if they give me an idea of specifically what I did wrong then that will be super helpful compared to my current situation where I don't know what I did wrong:

^ My reasoning: My reasoning for this one was probably flawed - just because a post shouldn't be flagged as link-only doesn't mean it shouldn't be deleted if it reaches the LQ queue. I probably would have voted "Delete" if I had it to do over again. From Shog9 on link-only answers:

strip the markup, and you still get at least a little bit of useful information. Does that mean these answers should forever hang around the site? No, not necessarily - if it turns out they're just not that useful, they should probably still be removed - or at very least, down-voted so that they rank below other answers.

Just remember: if the text of the post contains an honest attempt at answering the question, then it is an answer - so don't flag it otherwise, and if you do, don't complain if your flag gets declined.

^ My reasoning: There's a lot of noise in this answer, but it still contains a useful answer. If I had it to do over again, I would have chosen to Edit, but I don't think it should have been deleted.

Since I'm often voting against consensus specifically in the LQ queue, it's obvious to me that I must be applying the review guidelines incorrectly to these posts, which is why I’m reaching out for some guidance. Thank you for helping me understand what I'm doing wrong, so I will be able to contribute useful reviews to the community!

285
You're doing it wrong: A plea for sanity in the Low Quality Posts queue