Why does giving a Bounty reduce your ranking on SO?

I recently placed my first bounty on Stack Overflow. I understand that by placing a bounty on a question, I am giving away some of my rep in an attempt to get a better answer / draw more attention to the question.

What I do not understand however, is why that should impact on my ranking: 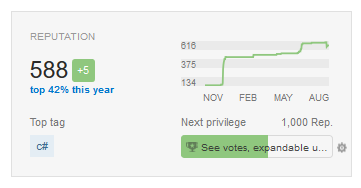 Before I placed the bounty, I was in the top 30-something% this year, and after placing the bounty, I've been lowered to 42%.

The reasons I feel this is unfair, is because the ranking system should be looking at who the "best" users are.

By placing a bounty on a question it does not make the user any worse, it just means that the user wants a better / quicker / [insert other reason here..] answer.

Shouldn't the rankings only be looking at Total Rep Gained - Total Rep Lost from Downvotes?

The reputation leagues, which is what that ranking is for, keep track of your total reputation changes for certain periods of time: All-time, Year, Quarter, Month, and Week.

Let's say you had gained 300 rep so far this year. You then placed a 50 rep bounty, making your total rep change thus far in the year 250. This drop in your total change therefore puts you slightly lower in the list.

Keep in mind that these leagues are really more for fun than anything. There's nothing for getting super high in the list, no prizes, not even badges. It's all just for fun, so don't sweat it too much.

Not the answer you're looking for? Browse other questions tagged discussion reputation bounty reputation-leagues .

-11
Should users lose rights after awarding bounties?
52
Is it possible to lose a privilege if you lose the required reputation for it?
-37
Can someone be a "top user" if they haven't been active for 2 years?

21
Is there no limit to edits you can make in a day? (rep farming)
2
Preventing wasted effort when user has a history of letting their bounties expire