Average Stack Overflow user over the course of their career

I'm not great at using the Data Explorer. I am relatively new to programming, and I'm curious as to how the average Stack Overflow user interacts with Stack Overflow over the course of their career.

Ideally, more experienced programmers pass on their wisdom to less experienced ones, or exchange ideas amongst themselves. Unfortunately, I get the sense that there are many people who only use Stack Overflow to solve their own problems without contributing.

Do most programmers start their careers with significant use and taper off as they become more experienced? Do users transition to answering more questions as they gain experience?

I guess my real curiosity lies in whether askers remain predominantly askers or if this role actually shifts.

Interesting question! Here's a small start, open to critiques as I feel I'm bound to've made some kind of reasoning mistake...

First things first, this is what my hacking around initially results in: 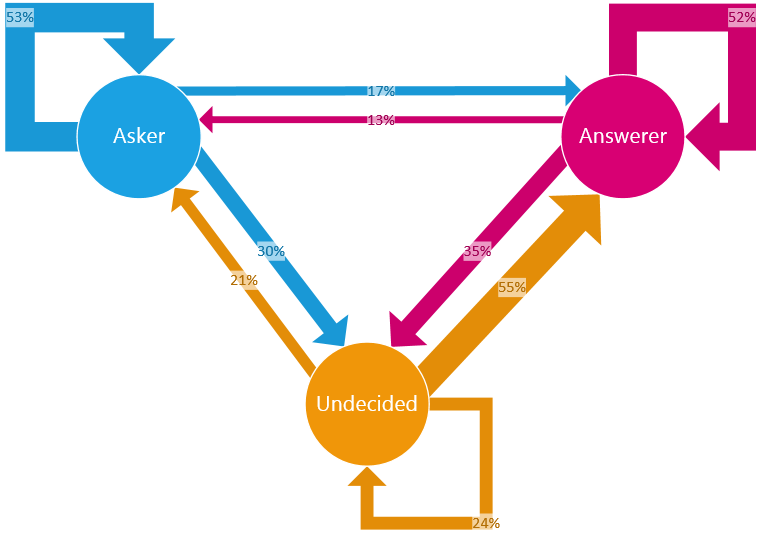 Note that -since the question is mainly about transitions- only the arrow widths are meaningful. The size of circles obviously isn't, as there are different number of users in each group.

Also, for now, let's look only at the more "interesting" accounts (>101 rep total). Though (over?)simplified, this should get us started.

The data.se query I hacked together for this (suggestions welcome!) gives the following pivot table:

So, to get to your question:

Do users transition to answering more questions as they gain experience?

My preliminary query doesn't show big transitions between Asker and Answerer, but does show that you'd have to look further into the Undecided category to know what's really going on.

My experience is that I started as a Asker, transitioned to an Answerer as it was the only way I had to show up my coding skills, and then settled to be asker/answerer in small bits.
Stackoverflow really helped me to transition to a remote job. After i got my first remote job, experience became more important than Stackoverflow reputation.
And i really wanted to be in the top 100 for a month and unlock everything. Probably if there was something to unlock at 50.000 I would have gone up to 50.000 probably :D
I still try to mantain my answers up do date, expecially the accepted one.

104
What is the median reputation level on Stack Overflow?
52
Should downvotes lower rep more than just -2?