Failed a review audit, Should be Improved vs. Unsalvageable [duplicate]

Ask Question
Asked 7 years ago
Modified 7 years ago
Viewed 50 times
-2
This question already has an answer here:
Difference between Should Be Improved and Unsalvageable in Triage (1 answer)
Closed 7 years ago.

I was reviewing the following question, and felt like with a proper addition of information the post could have been useful. The users problem was the range inputs are not working in IE using a WordPress plugin, however the post is low quality as there is no code (and bad grammar).

Without code, proper grammar and an explanation of what the user tried, the post is bad, however I don't feel it's unsalvageable, if Vishnu followed the advice in the comments, the post could easily be salvaged into a useful post about why his particular inputs are not functioning in his application.

I've been trying to increase my ability to review with accuracy, and this one threw me for a loop, why exactly is it unsalvageable?

It becomes clear what he is asking if you read the whole post, even if it is formatted terribly. If only code was added, it would be fine. I feel like while reviewing I run into plenty of questions where code simply needs to be added, and then the question is a useful addition to the site, which falls into Should be Improved as far as I know.

I was following the general sentiment from this post. 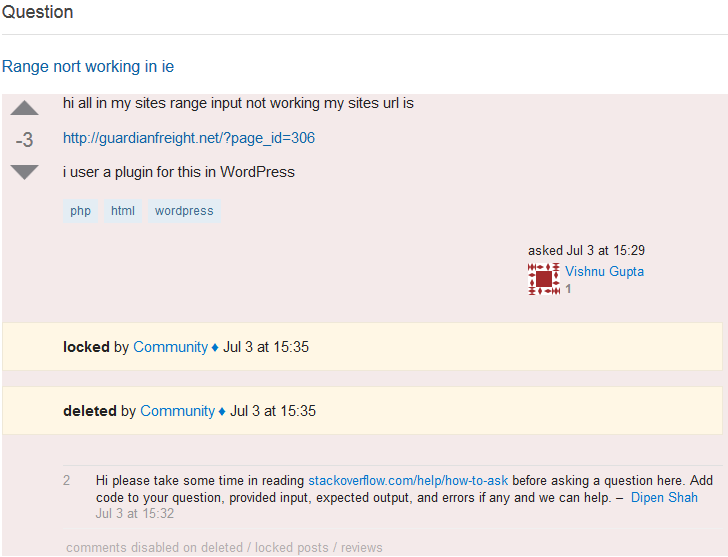 That question does not include even close to enough information necessary for an answer.

Because of potential link-rot, links are not taken into consideration; As well, users from the community can not be expected to follow a link and dig through the source code just to make the question on-topic.

If you remove the link, the question is as follows

hi all in my sites range input not working, i user a plugin for this in Wordpress

This question could be closed for any of the following reasons, and there is no reasonable amount of editing that can be done by the community to make it on-topic and answerable.

Not the answer you're looking for? Browse other questions tagged discussion specific-question disputed-review-audits .

78
Difference between Should Be Improved and Unsalvageable in Triage

31
How to handle good edits to unsalvageable posts?
14
Flag declined, needs another look
1
I failed this audit, but the question is Too Opinionated and Off-Topic
3
Confusing audit case: "not an answer" was already fixed into a comment
15
Review audit / moderation inconsistency
8
Why was this answer audit low-quality?