Ask Question
Asked 5 years ago
Active 5 years ago
Viewed 110 times
1
This question already has an answer here:
My only choice when flagging a post is “other” (“in need of moderator intervention”) (1 answer)
Closed 5 years ago.

I found an answer that I wanted to flag as NAA (although, now that I think about it, it probably isn't and just deserves my downvote instead), but when I tried to flag it, the option wasn't there! In fact, there was only one option:

I thought that was strange, so I opened the dialog on another answer in the same question: 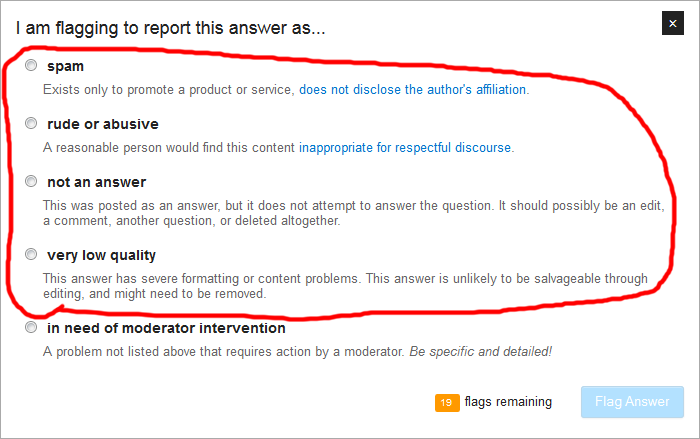 The dialog for this other answer worked correctly, with all of the possible flags listed.

Why are they not shown on the first answer?

(I will preemptively defend against closing as a duplicate of question such as Unable to see all flag options by saying that that question talks about flagging questions, and the answer doesn't apply here.)

I believe that's almost always due to the answer itself being deleted (by the user, through review, or by a moderator) after you've loaded the page but before you've brought up the flag menu. The flag menu will respond to the state of the post at that moment, and only present relevant options.

I usually recommend forcing a refresh of the page at that point to verify that the post has already been handled. If so, you don't need to worry about flagging it.

Not the answer you're looking for? Browse other questions tagged support flags answers .

6
New flag options to aid faster nonsense answer removal
2
Flagging an answer sometimes don't show the reasons list
1
Deleted answer can be flagged for moderator's attention
15
Two different duplicate flags?
17
Flag Dialog shows that I have already raised some flags but not others, but I am disallowed from raising any types of flags
31
Should I cast delete votes on non-answers? Or flag them? Or both?