A while back after running into a pretty scary and incredibly insecure answer, I started to think about the inadequacy involved in notifying others. Then, after reading the post, Mod seems to have deleted all the answers to a supposed duplicate, it reignited the question: what can and should we be doing about dangerous answers?

Currently, the options for addressing dangerous and outdated posts are:

The problem that I have with all of these actions is that they don't generally solve the full problem and they can cause messy blow back. So, I started trying to come up with a solution that could solve this problem in the most efficient way. Instead of trying to reinvent the wheel, I started researching Wikipedia's dispute model. In a nutshell, they use tagging to denote problems to the page author(s) and readers.

"Tags" are often used to indicate problems. [...] Tagging allows editors to specialize, teaches them and warns readers about subpar content. It is better if people solve the problems they encounter themselves, but not everyone may be able to. Editors are sometimes obliged to justify inclusion of tags, such as in the case of Template:POV.

* Emphasis mine. You can read more about this concept here. For full context, here is a screenshot of a handful of wikipedia's dispute templates: 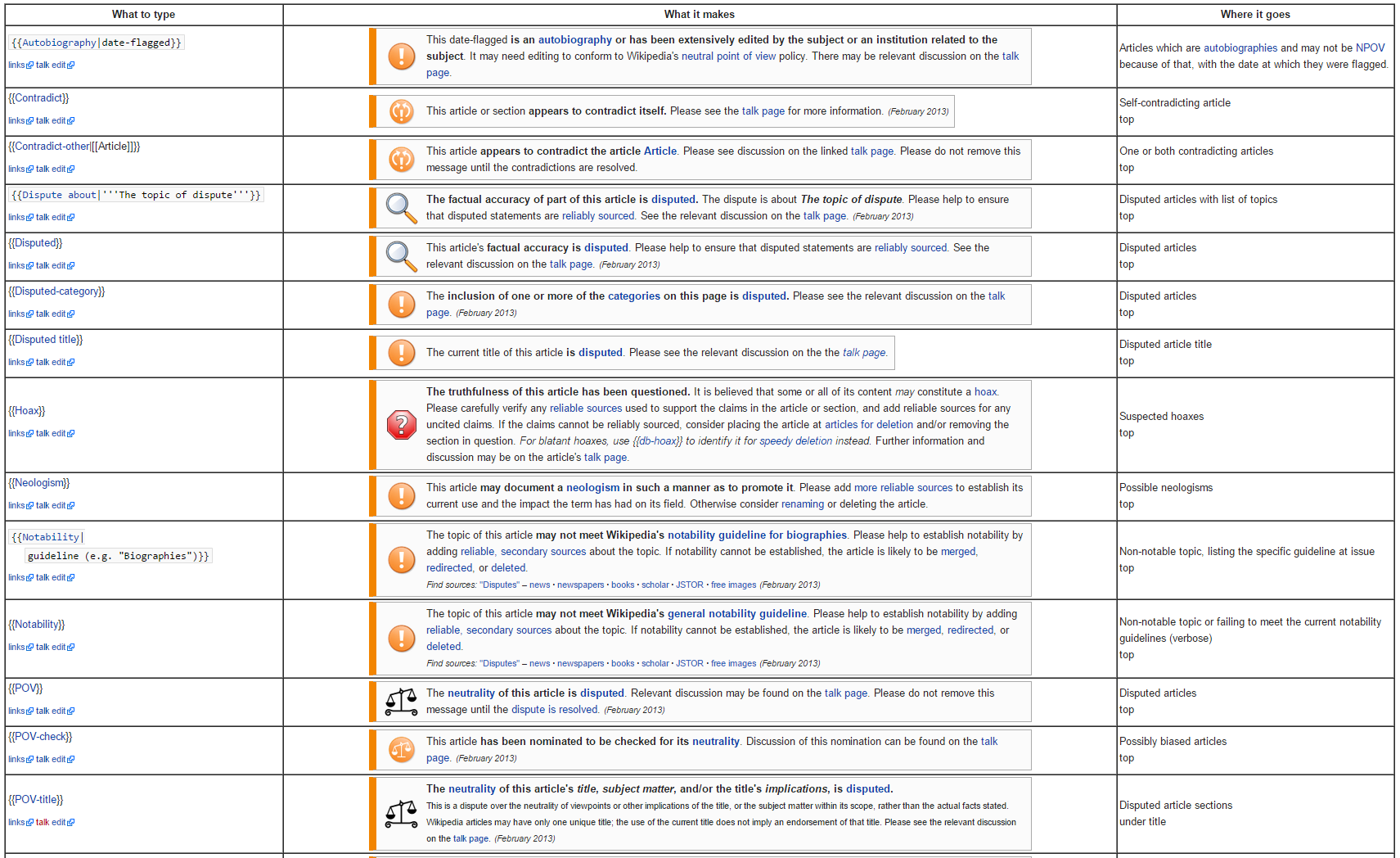 I propose that a similar system be implemented for answers.

This system could be very similar to close voting, where a group of privileged users could vote on warnings that should be added to an answer. It should probably differ in a few ways as well:

If this idea is applicable, then our next task will be coming up with warnings that most accurately cover dangerous answers without overlap.

We need this, and it was part of the design criteria for the original site; that shiny new Stack Overflow that made its debut back in 2008. It's a problem for most of of the major tags, and it's now becoming a problem for many of the older sites in the network.

I'll be proposing v0.5 of this idea on MSE at some point tomorrow. What this involves is basically creating a new post type. We currently have:

This introduces a post that was deprecated, and probably a badge for the person that wrote it. It was great, it helped a ton of people, but stuff moves pretty quickly and now it needs to retire in favor of newer information.

The idea is, let folks vested in the tags it served decide that it's time for it to go to greener pastures, through voting. Put a special notice on it (as you suggested) and show it in a special way so the notice draws attention. Give it posterity, as programmers are still likely to encounter what it describes, and position it below the most recent answer that attracted the most votes. This allows it to continue to 'yield' to more current information.

It won't lose the accept mark (if it has one) unless the author of the question accepts something else. No rep is lost (well, not an issue since it's likely old enough for the rep to stick around anyway), the answer won't be portrayed as bad, but there will be clear signs to see more current information above it.

What I'm still working on is how to gate the privilege (tag badges are very likely), how we'll handle ageing of deprecation votes (if at all) and the badge details.

Please do not quote me on this as a plan for an exact implementation...

What bothers me is tags with such a low volume that there just aren't that many gold or silver badges for the tag. That complicates this from a performance perspective, so I have more noodling to do. It has to be open to 10 or 15k users in the absence of many tag badge holders.

But yes, we're doing this. Joel just reminded me that we haven't done it yet, so I'd like to get it done. Initially for answers, and we'll see how it goes.

A few of the easy and noticeable warnings:

If there are "canned" warning messages for common types of potentially dangerous answers, they need to be customizable at least on a per-tag basis. For instance, the C family will want to have a warning along the lines of

The code in this answer provokes undefined behavior, which means, even though it may appear to work, a newer or different compiler might arbitrarily miscompile it

but many other programming languages have no such thing as 'undefined behavior', or if they do, its semantics are more like what C calls 'unspecified behavior' (which is far less troublesome).

Why not use the existing flagging pattern? I understand currently most (all?) of the VTD reasons end up in the answer being deleted, but it doesn't necessarily have to be that way.

Flag -> I am flagging to report this answer as... insecure|outdated -> more specific reason

Introducing a tagging system similar to Wikipedia is just one more... vertical, I suppose, in the editing workflow. It's dissimilar to markdown and doesn't follow any discernible HTML/XML format - the only two things users need to know to edit content.

As well, MediaWiki tags are usually to flag some specific piece of the content - not the content as a whole. Flags, on the other hand, do the latter.

410
Introducing Outdated Answers project
114
How to deal with dangerous answers
87
Is the dupehammer (Mjölnir) still being evaluated, and if so, what is the current outcome?
65
Mod seems to have deleted all the answers to a supposed duplicate
42
What is the prevalence of accepted or top-voted answers that are actually intrinsically flawed? (research)
17
How do we handle totally outdated answers?
7
Are the upvotes and accepted marks keeping these bad answers from very-high-rep users alive?
13
Another old, off-topic, popular question - can it be deleted?
7
If a correct answer is deprecated, should I vote it down?

24
Is a comment warning enough when dealing with potential data loss?
72
Pop up a warning for answers at low quality, off-topic questions
24
Help new users understand why their post was down-/closevoted - Version 2
33
Feature request: images / links to images of code warning for new / low rep users
16
Unhelpful-Title Warning for Question Writers
13
What would be appropriate metrics to measure how well we are dealing with ageing content?