Do you think I was too harsh?

It seems to be I started off nicely enough, but I really feel that OP shouldn’t be messing around with ArrayLists when he can’t do a simple dry-run.

Screenshot of the comments for those who don't have 10k reputation: (the question's been deleted) 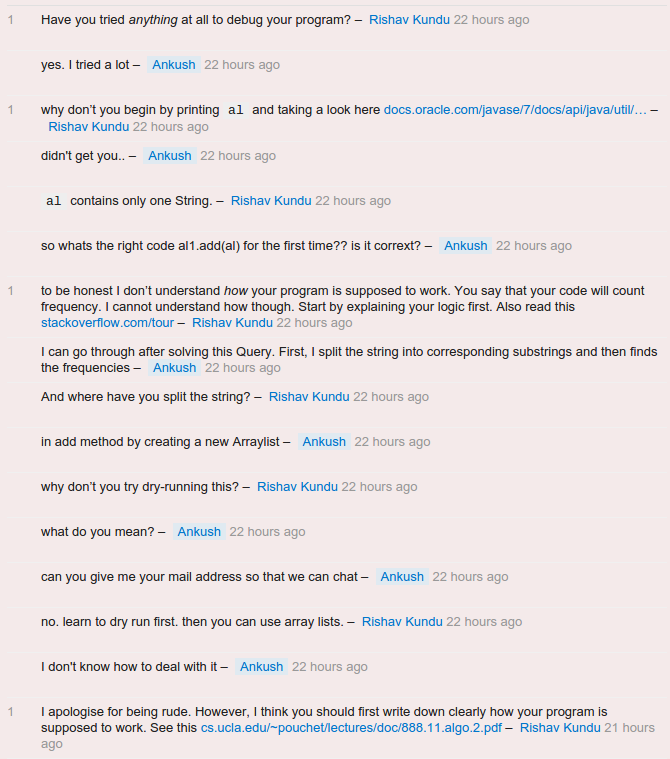 [My guilty conscience awaits your opinion]

I think you were borderline appropriate, tonally. You didn't attempt to insult the user or their knowledge, and you wrote several comments, all trying to help the user understand. However, you did come off as immediately exasperated with your first comment:

Did you even try to solve your problem?

Of course I've tried stuff! So much stuff that I couldn't even list it in a simple comment! How dare you?!

And that puts users at odds with each other, which goes against the whole point of the site, which is to help other programmers.

I think clarifying what a dry run is would be very helpful. I know what the term means outside of programming, but have never heard it used in this context before, so I too was stumped until you explained it in your comments here. An apology never goes amiss, either, though that's certainly up to you.

The question was not quality

First off, the question itself has severe issues. It is a code dump, its title literally starts off with "what is wrong with the code"; it has poor grammar, formatting and indentation; and it makes no attempt whatsoever to describe what was supposed to happen versus what was actually happening.

What have you tried

I think you had good intentions, but really it was an inappropriate line to take. This is why what have you tried is literally banned on Stack Overflow as a comment. Back when the ban was first implemented 2 years ago the reasoning was explained by Shog9♦ as

"If you don't have the time or inclination to engage in conversation with the author of a post, don't comment - just vote."

Essentially the comment "Have you tried anything at all to debug your program?" is a workaround for a "What have you tried?" comment. If you are willing to put some time into a question then you should be aiming to end up with the result of an answerable question. If that is not possible, then there is really no point in commenting.

What have I tried

I have also come across these same types of questions every time I am clicking around to answer. This scenario is definitely not new, and I have even addressed what I have tried previously in this answer.

I usually ask for an edit by stating what I feel others would need to know to be able to properly answer the question, a helpful hint, a generally accepted standard or guideline, or what I feel is lacking.

In my opinion, at the heart of the "what have you tried" issue is what is known as a "help vampire". It seems to me, "what have you tried" usually stems from a reluctance of users to blatantly do the work of others. This is where it is important to provide guidance on how the OP can share more details or more requirements to narrow down what is usually a rather vague question.

Unfortunately, sometimes the OP really is trying to just get some very specific work done for them here without trying themselves, and in that case I feel a vote to close is appropriate.

As stated in the linked material, if the question is beyond saving it can always been downvoted and closed. Ideally, it would be improved so that someone can answer it.

10
Should I vote to reopen my edited question
42
Was I too harsh when handling a newbie question?
3
How can I improve these unposted question and answer?
21
Programming Language Identification Questions
1
Was I too harsh in my comment on this post?
44
How do we give constructive criticism to new users who have only very probably mindlessly turned to Stack Overflow?