Can you get your account suspended for "joking" around?

Is it possible that my Stack Overflow account will be suspended for joking around?

Yes, they can get you suspended; they might not.

It depends on the frequency you post one, the amount of times your comment/post gets flagged, the number of people who find your comment offensive, the moderators mood on the day and the direction the wind is blowing in 1,000km northwest of your current location.

Remember that in order for something to be a "joke" someone else must find it funny...

Well...yes. All actions you do here do have an effect on your ability to participate on the site, regardless of if it was in jest.

The issue here is that I don't know if you were joking. (And if you were, you should knock that off; we're not some run-of-the-mill bulletin board where that behavior is just tolerated.) If I saw that comment, it'd get flagged, and if you were punished because of it, then so be it - you really shouldn't be joking around like that anyhow.

Keep some professionalism on the site and interact with others as you would if you were doing business with them. Maintain a level of respect and common courtesy, and things will work out just fine.

As other's mentioned, what's considered a joke or just one of the following flagging choices 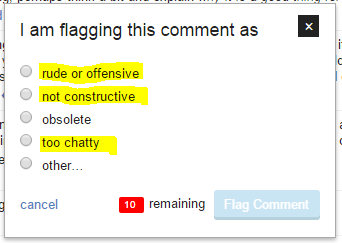 depends. Especially on how often seen from your context, and how frequently your comments/jokes were flagged for one of the above reasons.

In general keep up a professional tone, listen to (read) what other's are telling you, and don't dress them down with seemingly joke comments.

We don't all have broom-sticks in the ass here, and well achieve jokes made in a professional manner (that's nothing contradictorily), but be sure making a joke and make it clear.

You may get banned for such behavior, but not without at least one warning that is sent to you before from a SO moderator.

If you already got one, take it seriously and improve in commenting.

This is not a joke site, and I imagine the moderators don't take kindly to people consistently wasting the time of others by posting nonsense.

1221
Why is Stack Overflow so negative of late?

6
Why can't we edit our profile while our account is temporarily suspended?
41
Possibly fraudulent account (new account of previously-suspended user)
1
Can a suspended user award a bounty which they started before getting suspended?
82
Why was I moderator-suspended from chat for 24 hours?
2
Is it possible to get suspended from voting on meta?