When was the last time the migration selection was updated ?
It's lacking programmers, code review, software rec and user experience SE.
And I'm not a huge reviewer, but I never had to migrate to tex or stats... 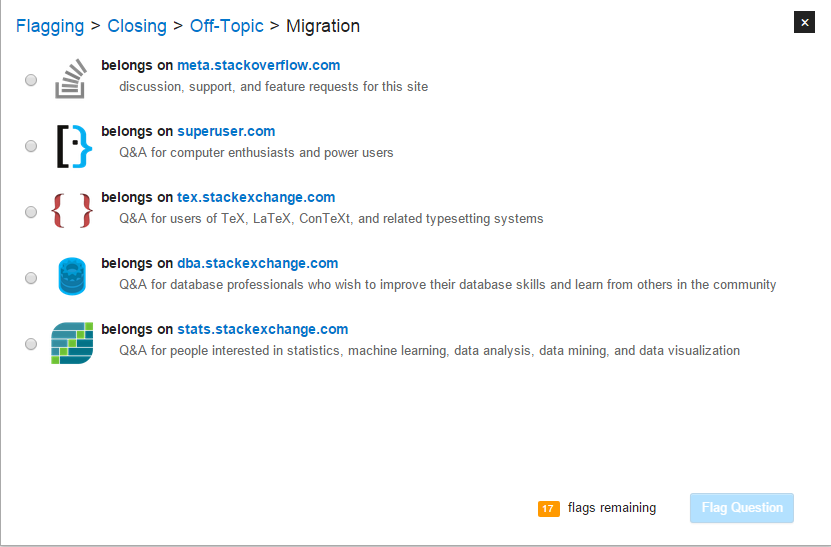 Code Review and Software Recommendations are in beta, and are thus ineligible as migration targets. CR actually has a lot of migrations, so it'll likely be considered as a migration target when it leaves beta; but it may or may not make it based on a number of factors that will need to be considered at that time. As for SR, it has a whopping 1 migration in the past 90 days; it's clearly nowhere near meriting a slot.

As for UX, it literally has zero migrations from SO in the past 90 days. Obviously it's not a frequent migration target.

As for the items on the list not being frequent migration targets, stats is the site with the single most migrations in the past 90 days, with 137 migrations. Tex is 7th at the moment, with one of the items above it being an inelligible migration target, and the other being GIS with 32 migrations (to Tex's 30). We'd need to see GIS surpassing Tex regularly over an extended period of time to merit it bumping it off of the list.

Not the answer you're looking for? Browse other questions tagged discussion migration .

265
Flagging migration should include more options

57
Add CrossValidated to list of migration sites in the Close Dialog
11
Is this review audit not off-topic?
3
Migration too slow
2
Revisiting migration options
42
Considering changing the migration process