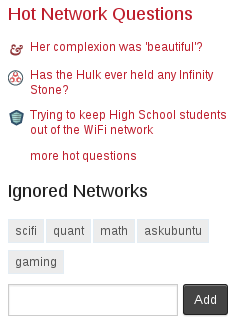 2
How do I filter some Stack Exchange sites out of the feed?
1
Can you customise the "hot questions" feed in the sidebar
1
Ability to hide posts from communities I don't care about
123
Users Can Report Bugs On Whatever Child Meta Site Suits Them
86
Film spoilers are showing up as Hot Network Questions
42
Option to hide certain Stack Exchange networks in Hot Network Questions?
20
Is meta feature polling effective?
26
Is it possible to filter the 'Hot Network Posts' tab?